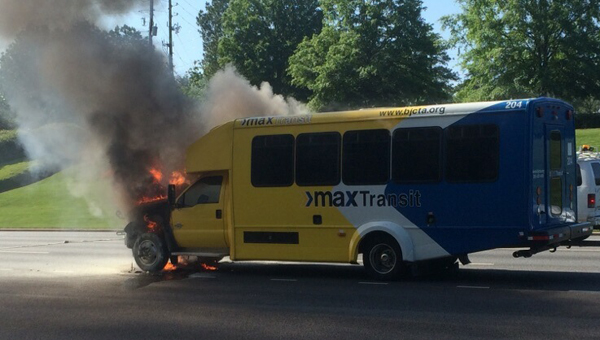 A Max bus caught fire the morning of Friday, April 21 on U.S. 280 in the Meadowbrook area. (REPORTER PHOTO/ALEC ETHEREDGE)

There were no injuries in the incident, according to Cahaba Valley Fire and EMR District Public Information Officer Grant Wilkinson.

The driver and one passenger were aboard the Max bus when a fire started in the engine compartment, Wilkinson said, and both were able to exit the vehicle before first responders arrived.

Once on the scene, CVFD firefighters extinguished the fire, and U.S. 280 was fully reopened to traffic shortly afterward, Wilkinson said.