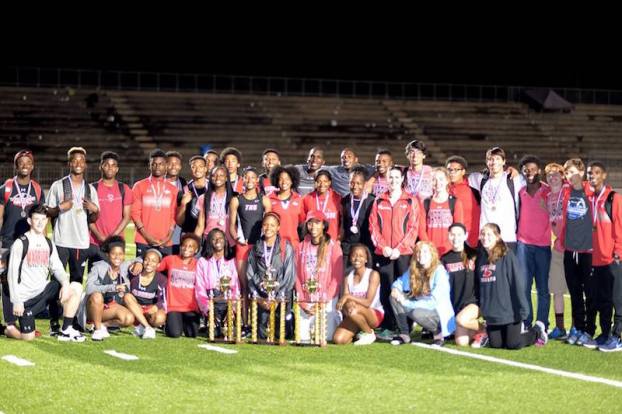 PELHAM – On Monday, April 17, several of the schools residing in Shelby County competed in the Shelby County Track and Field Championships at Pelham High School.

While most of the schools from the county competed in the meet, the Thompson Warriors stood out from the pack dominating in the final standings of most events.

Starting in the girls 100-meter dash finals, senior Lauryn Dancy took home first with a time of 12.18, while teammates Zakiria Holifield and Alandria McCurdy finished directly behind in second and third.

McKenzie Hogue finished first overall in the 1,600-meter run finals with a time of 5:28.96, which was just a little under a second faster than Westminster at Oak Mountain’s Maddie Hoaglund.

In the girls 200-meter dash finals, Thompson took three of the top four spots including the top spot which was occupied by Dancy, who ran the race in 25.19. Holifield and McCurdy had strong performances again as well, taking third and fourth, respectively.

For the fourth consecutive girls event, the Warriors saw a first place finisher as sophomore Madison Wright beat Pelham’s Erin Long in the 300-meter hurdles finals with a time of 49.50, which just beat Long’s time of 49.95.

Their first team win came in the girls 4X100-meter relay finals with a time of 48.02, which was over two-and-a-half seconds faster than Briarwood’s second place time of 50.58.

In the girls triple jump finals, freshman Niya Oden and senior Jamilia Evans took the top two spots. Oden won with a measurement of 36-04.00, while Evans was just short of that mark at 35-06.25.

Moving over to the boys’ side of things, seniors Craig Clark and Brandon Lee finished first and second in the 110-meter hurdles finals. Clark finished with a time of 14.47, while Lee ended in a time of 16.24.

Juniors Samuel Holmes and Alondae Vassar finished first and second in the 400-meter dash finals with times of 49.97 and 50.05, respectively.

Viktor Turek, a junior, finished atop the standings in the boys discus finals with a measurement of 146-00.50.

The Warriors also swept the top three spots in the boys pole vault finals as Ryan Colley, Ashton Hogland and Ozzy Heller finished in that order. Colley won with an unbelievable measurement of 12-01.00, almost three feet higher than Hogland and Heller, who finished with measurements of 9-06.00 and 9-00.00, respectively.

KJ Robertson was the last Thompson athlete to take home a first place finish as he took the shot put finals with a measurement of 45-02.75.

By ALEC ETHEREDGE | Sports Editor The final ASWA softball rankings are upon us, which means area tournaments and postseason... read more