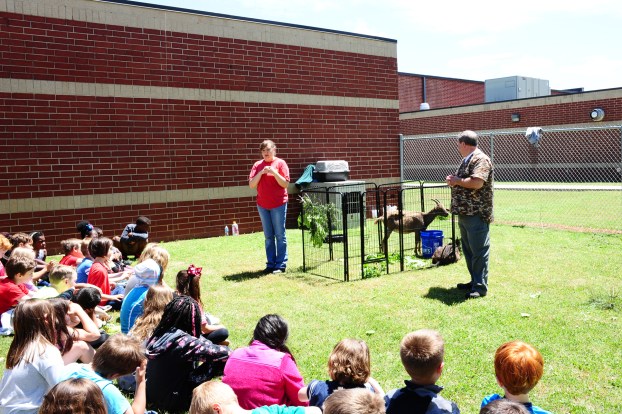 ALABASTER- Creek View Elementary School students visited different stations around the school for the 2017 CVES Science Festival on Monday, April 24. Principal Charissa Cole said the science festival gave students an up-close look at the science they are learning about in the classroom.

“It brings hands-on experiments to the children here, and it gives them an awareness of how awesome our earth is and how science is everywhere,” Cole said.

The science festival kicked off with a special guest, known as “the science guy.” Throughout the day, students learned about living organisms, birds of prey, weather, aerodynamics, dinosaur bones, the Morse Code and STEM-related activities.

Cole said some of the stations were run by parents, students from the University of Montevallo and local meteorologist Wes Wyatt.

“This helps us collaborate with other groups in the community,” Cole said.

“It’s been a lot of fun. So far, we’re trying to build something stable and tall. We’re coming up with new ideas to make it taller,” he said. “We also got to watch airplanes fly and see dinosaur bones.”

Second grader Cooper Craycroft said his favorite part of the science festival was a fun experience, and he especially liked visiting the “science guy.”

“He taught us a lot of cool things about science,” Cooper said. “He had a blow dryer and he used it to make a parachute fly up to the ceiling, because hot air was in the parachute.”

In the past years, Cole said the school has always held its science festivals to coincide with Earth Day. While this year’s Earth Day occurred on Saturday, April 22, Cole said CVES tried to host the 2017 festival as close to the date as possible.

“It’s a national holiday. Earth day is the best day, because it makes our kids aware of our earth and why we need to take care of it,” Cole said.

By GRAHAM BROOKS / Staff Writer HELENA–It’s no secret that for schools to be successful, adequate funding should be distributed... read more