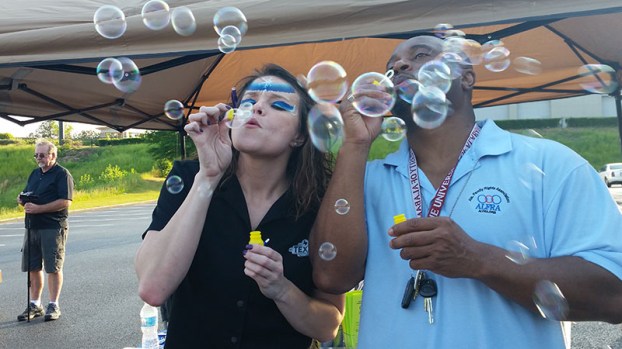 Those wishing to participate in “Bubbles of Love” were asked to blow soap bubbles on April 25 to show support for the parental alienation prevention campaign. (Contributed)

CALERA – The city of Calera, along with other cities throughout Shelby County participated in “Bubbles For Love” on April 25 to help bring awareness to parental alienation prevention.
Sponsored by Alabama Family Rights Association, Exchange Club CAP Center, and Exchange Club of Shelby County, those wishing to participate were encouraged to blow soap bubbles at noon to show support for the campaign.

Parental alienation is a term used to describe any number of behaviors and attitudes on the part of one parent, both parents, or a third party designed to interfere, damage or destroy the relationship a child has with their other parent. It is a form of abuse that causes emotional trauma to children, according to a press release from the Alabama Family Rights Association.

“A lot of people don’t know that parental alienation occurs so often in our society,” said Kenneth Paschal, Parental Alienation Awareness Coordinator with the Alabama Family Rights Association. “It is anything that hinders a child from being able to freely love their other parent. It is one of the worst mental and emotional experiences our children face. Everyone is naturally born to love, but when you restrict that love, it traumatizes a child.”

April 23 kicked off a week of bringing awareness to the campaign, and on April 25 those wishing to participate could blow bubbles and upload their photos to social media using the hashtag “bubblesforlove.”

“Oftentimes when you have issues with parents, you have a winner and a loser,” Paschal said. “It then promotes a child from being alienated from the other parent, and more often than not our kids lose every time. By bringing awareness to this topic, it shines light on it and hopefully gets people to start thinking about it. Kids should be allowed to love both of their parents.”

Paschal said the response from the community had been positive to the campaign.

“We were able to go to the Baron’s game on Saturday and pass out 3,000 bottles of bubbles where everyone blew bubbles for the first pitch,” Paschal said. “It was a great opportunity to help get the word out. We also encouraged anyone that no matter what they were doing or wherever they were on April 25 to pick up some bubbles and show their support. The bubbles help to represent the love that all kids should be able to have.”

Parental alienation can arise from divorce, child custody situations and even with intact families, according to the release.

Parental alienation is evidenced by the alienating behaviors of a person, such as a parent, family member, or as a result of the judicial system restricting the relationship between a child and a loving parent.

For more information about the campaign, visit Alfra.org.

HOOVER – Bud’s Best Cookies have long been favorites locally and across the country, and the company’s founder and chairman,... read more