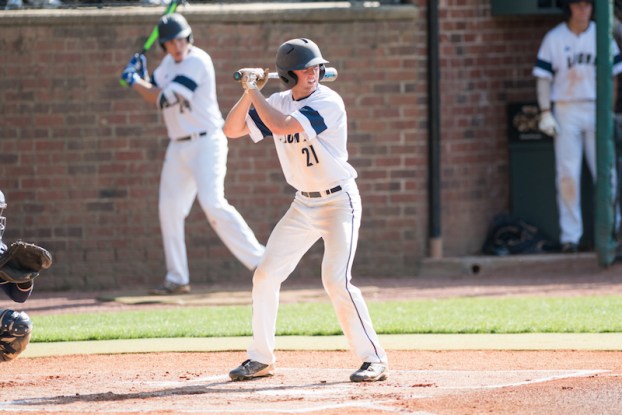 No. 1 Briarwood fell to No. 2 Faith Academy in three games to end their season a series short of the quarterfinals. (Reporter photo/Keith McCoy)

Briarwood shut out by No. 2 Faith in final two games

MOBILE – A pair of shutouts proved to be the difference April 28-29 as No. 1 Briarwood Christian fell to No. 2 Faith Academy in a three-game state-title-worthy matchup, which came in the second round of the AHSAA Class 5A playoffs.

The top-ranked Lions took the first game, 6-5, on April 28, but then narrowly lost a no-hitter and shutout in the night cap, 1-0. Faith jumped out on Briarwood early in Game 3 on April 29 to pull out a 6-0 victory and ending the Lions’ season with a 27-5 record.

“I would have loved to have seen them late, because I think we’re one of the best teams in the state, and obviously they are too, but I’ve seen it happen to other teams. It’s just part of it,” Briarwood head coach Steve Renfroe said. “They’ve got more arms than we’ve got and it came down to really two pitches on Friday night in Game 2 that determined the split.”

Renfroe said it is tough to see the season come to a close in the second round.

“I miss this team already. This senior class, wow, they’re special – a great group of kids,” he said. “This was the hardest hit I’ve taken in a long, long time. I’m very proud of them.
GAME 1: Briarwood 6, Faith 5

Sam Strickland put the Lions on the board in the top of the third, driving in Will Shepherd on a fielder’s choice to third base. Shepherd walked to get the inning started.

Briarwood led off the fourth with back-to-back singles from Kolby Kwarcinski and Logan Whittlesey. Michael Hiers doubled in Kwarcisnki, followed two batters later by a one-out RBI single by Eddy.

Faith loaded the bases in the bottom of the fourth with a single, error and walk before Gabe Shephard gave the Rams a 4-3 lead with a two-out grand slam.

Carson Eddy delivered a one-out single in the sixth to spark a three-run inning for the Lions. Hudson Hartsfield reached on an error to setup a two-run double to center by Strickland. Will Baumbach added a sac fly to score Caleb Daniels, who pinch ran for Strickland.

Hiers took over for Whittlesey in the seventh and pitched into a jam, giving up a walk and one run on a bases-loaded fielder’s choice. A fly ball to Hartsfield in center secured the save for Hiers and Whittlesey’s win. Whittlesey allowed four runs on six hits and struck out five in his six innings of work.

Eddy, Kwarcinski and Whittlesey each hit 3-for-4 in the game.

Faith’s Gabe Shepard and Briarwood’s Sam Strickland locked into a pitchers’ duel in the second game of the series.

Strickland attempted to give himself help in the bottom of the first, delivering a two-out single for the Lions, but it proved to be Briarwood’s only hit of the game. Shepard struck out 12 of the next 13 Lions hitters entering the sixth inning. Meanwhile, Strickland carried a no-hitter through five innings, allowing only a walk and a hit batter along the way.

Jackson Bell broke up the no-hitter in the top of the sixth for Faith and later scored on a two-out RBI single by Brooks Carlson to give Faith a 1-0 lead.

Gabriel Russell drew a leadoff walk for Briarwood in the bottom of the six and moved into scoring position on a sac bunt by Michael Hiers, but Shepard got a pop up and line out to get out of the inning.

Shepard recorded two more strikeouts and fly out in the seventh to finish the game with 15 Ks and the complete-game, one-hit shutout win. Strickland allowed three hits in the final two innings and struck out five in the game.

Michael Hiers, who recoded the save in Game 1, started on the mound in Game 3 for the Lions and fell behind early with a pair of leadoff singles and a walk to load the bases. Ryan Bell followed with a one-out single to give Faith a 2-0 lead in the top of the first inning.

The Lions stranded a pair of base runners in the first inning, and Faith added another run in the third inning after a one-out double by Whitman and RBI single by Ryan Bell, who hit 3-for-4 in the game. Ryan Bell doubled in another run in the top of the fifth and scored on a triple by Braxton Bell. Jamison Morris added an RBI single to make it 6-0 Faith with a three-run fifth inning.

Morris tossed a complete-game, four-hit shutout for Faith and struck out five.

“Today was tough to take. Having to bring Michael in to close, we hoped to get four innings, which we did. He got beaned in the shoulder in the second game and gave us all he could give,” Renfroe said. “We faced some really good guys this year at Chelsea and Oak Mountain, and we’ve always scored. We haven’t been shut down two games in a row like that. I really thought that we would score. I have to tip my hat. Their guy was really good.”

Hiers was chased in the fifth inning, allowing four runs on seven hits and a walk. He struck out three. Ben Metzger, Noah Whatley and Gabe Russell closed out the game for the Lions.