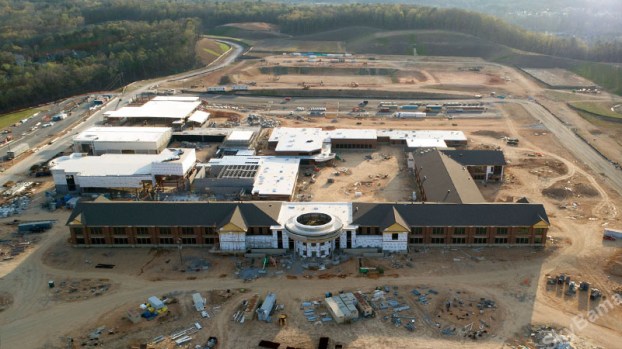 Alabaster’s new high school will open to students in January 2018, not in August like originally planned. The school system will complete the move during the Christmas break. (Contributed/Kevin Henderson with SkyBama.com)

ALABASTER – Alabaster’s under-construction new high school will not open to students in August, as originally planned, the Alabaster City School System announced on May 1.

Alabaster School Superintendent Dr. Wayne Vickers said the school system recently decided to delay the opening by one semester at the recommendation of the new school’s construction manager, Volkert, and architectural firm, McKee and Associates.

“We wanted to go ahead and announce this so everyone knows the timeline,” Vickers said on May 1. “This gives us an opportunity to move in a timely manner and check all the systems before students arrive.”

Over the past few years, contractors have been working to have the new high school ready for students to begin attending classes at the beginning of the 2017-2018 academic year. However, a delay on bidding the first phase of the project in 2015 affected the timeline, said project engineer Jonathan Grammer with Volkert.

The Alabaster Board of Education originally planned to award a bid for the entire new high school construction project in November 2015, but rejected the bids after they came in higher than expected.

After rejecting the original bid, the School Board broke the project into multiple smaller bids, and gradually awarded them over the past few years.

“If that original bid would have come back a little more competitive, we probably would have had a better shot at opening (the new school) in August,” Grammer said during a May 1 interview. “With construction not getting started until February of 2016, we kind of knew it was going to be aggressive with trying to open in August of this year, but we wanted to try everything we could to still make that happen.

“The contractors have been great, but there’s only so much you can do in a given amount of time,” Grammer added.

Grammer said if students would have begun attending the new high school in August, they would have been sharing the campus with construction crews finalizing projects such as the indoor sports arena and auditorium.

“We thought that would be asking too much of our contractors and the school system,” Grammer said, noting crews likely will be done constructing everything except the outdoor athletic facilities by November. “Our main goal is to get it right and make sure the fit and finish are what we want before the students arrive. If you try to rush it, it can lead to problems down the road. You’ve only got one shot to move in and do it right.”