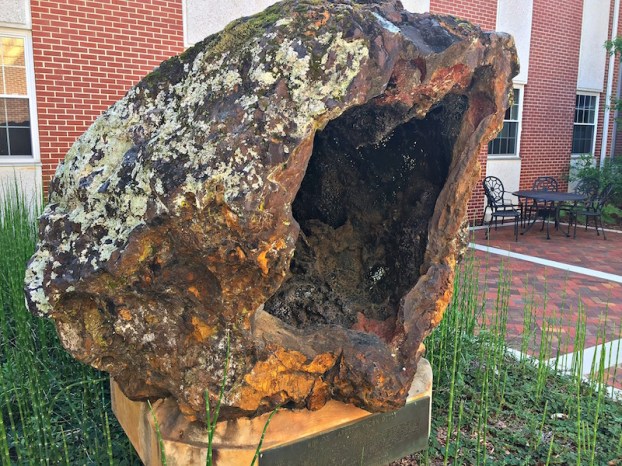 The nice thing about growing up in Shelby County is that, as the years progress, you have people who know you and keep you “in line.” Recent Day by Day articles started with “must see” sites around Montevallo. Last week’s visit to Calera’s “House of Prayer” began a focus on a different part of the county. However, quite a few readers have since voiced opposition to leaving Montevallo without mentioning “the rock.” Now, when most women picture an exciting stone – it happens to be very large, very sparkly and begins with the letter “D.” Certainly those are “must see”– but Montevallo’s boulder is interesting for a totally different reason.

First of all, its title is enough to spark the imagination. It has been named the “largest geode in the world.” And, the emphasis is on “large” – it weighs in at 8 tons. How did it come to rest on a college campus, above ground, for the entire world to see? Over 50 years ago, the Shook & Fletcher Mining Company was working in an iron quarry in northwest Shelby County when they discovered a rock anomaly. Realizing what an extraordinary iron-oxide geode specimen it was, they worked with the Shelby County highway department to extract it intact. Through negotiations with the University of Montevallo’s science department, the decision was made to house it on the campus. It remains there and can be visited by interested geologists and regular folks.

Before you plan a visit to see this marvel of nature, prepare yourself a bit so you will know what to expect. If you go looking for something with crystals shimmering in the sunlight, you might be a bit surprised by the look of this geode. In fact, it might look a bit more like something from outer space rather than inner space. Shelby County’s vast quantities of limestone under the soil not only provide economic opportunities and livelihoods for its citizens; they also provide internal cavities, which can give birth to geodes. If a cavity forms in the limestone and iron-mineral rich ground water seeps in over time – iron can be deposited in the limestone and left to harden. Other minerals leave their fingerprints in the space too. Rings or bubbles of various iridescent colors identify all the deposits and give the rock its unique pattern and coloration. Instead of crystals, visitors will see dark colors of purple, blue, red and black in the bumps and lumps deep inside the sphere of limestone.

The geode stands on a pedestal with an explanatory plaque in the courtyard of Harman Hall, the University’s science building. You can access the courtyard through the building, so plan to go during regular business hours. People travel from all over the country to see and study this unusual boulder. You won’t have to go far to see that it “rocks.”

A house built for prayer

By RENE’ DAY / Community Columnist Indeed, we are living in strange times. After the events of the last week... read more