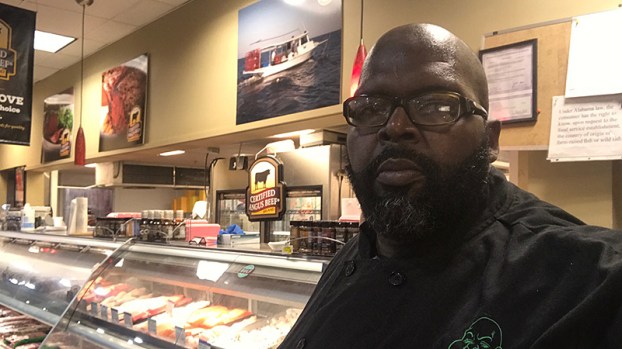 For Alabaster resident and Big Daddy Bomb BBQ Sauce creator Dwayne Thompson, the past year has been nothing but a whirlwind.

“My business has grown so much within the last year,” Thompson said. “I consider myself incredibly blessed to be able to do what I am doing, and look forward to seeing where things go from here.”

What started as a business run out of his home has now grown into the sauce being manufactured out of Kyleigh Farms in Enterprise, and being sold in 17 Piggly Wiggly grocery stores throughout Birmingham and surrounding areas.

“We reached a point that we no longer could make the sauce in a commercial kitchen, so we are having it manufactured now,” Thompson said. “We changed the design of the bottle, and we have joined forces with Piggly Wiggly. We are still hoping to grow and be on more shelves in more Piggly Wiggly grocery stores, so if people like the sauce, and would like it sold in their local Piggly Wiggly we would love for them to call and request it.”

While Thompson mainly works as a community police relations assistant for the Birmingham Police Department, his second job is spreading the word about his signature barbecue sauce, which he said people enjoy for its delicious taste.

“My ultimate goal is for my barbecue sauce to be on tables at restaurants,” Thompson said. “Just like mustard and ketchup are available on most tables, I want my sauce to be available as well. It is a great meat sauce, but it is also a delicious dipping sauce.”

Thompson said the business still keeps him busy, as he is still the primary distributor for the business, but the recent growth is something he is thankful for.

“It has ultimately been a great experience,” Thompson said. “With any business you are going to have your ups and downs, but I prayed for a second job, and a second income, and this has definitely been the answer to those prayers. Nothing comes without a lot of work, and we are trying to figure out ways we can continue to expand.”

Another change within the business is the ability for the sauce to be sold as a fundraiser for schools or groups interested.

“I have been doing some different teams so far, and it has been really great,” Thompson said. “If anyone has a sports team, or a group or something that needs to have a fundraiser, I would love to help them out.”

Buck’s Pizza in Alabaster is still using Big Daddy Bomb BBQ Sauce as part of the base for their barbecue chicken pizza and as a sauce for chicken wings, Thompson said.

Thompson will be at several upcoming events for anyone interested in trying his sauce including Homestead Hollow May 11-13, Tannehill State Park every third Saturday and Sunday of each month, and at Alabaster Cityfest on June 3.

For more information about Thompson’s Big Daddy Sauces, visit Twitter, Instagram, or Snapchat at @bdbbqsauce, on Facebook by searching for Big Daddy BBQ Sauce, by emailing bdbbqsauce@gmail.com, or by visiting Bigdaddysaucesllc.com.

By NEAL WAGNER / Managing Editor ALABASTER – Students in the Alabaster City Schools district will return to classes on... read more