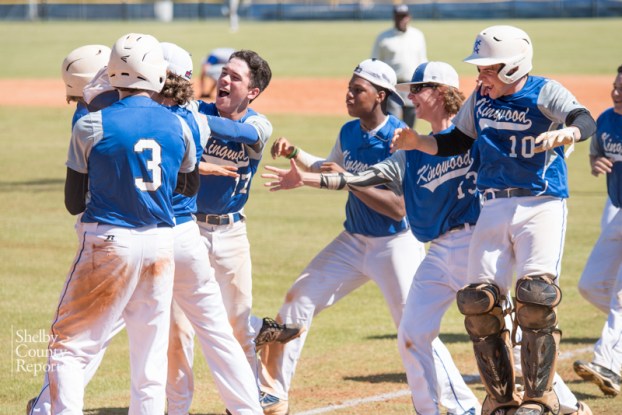 The Kingwood Lions celebrate a quarterfinal win over South Choctaw. The Lions saw their season come to an end in the semifinals after dropping a decisive game three at Clarke Prep. (Reporter photo/Keith McCoy)

GROVE HILL – An extremely impressive season has officially come to a close for the Kingwood Christian Lions baseball squad as they came up one win short of a trip to the state championship after dropping a decisive game three on the road at Clarke Prep on Thursday, May 4.

The Lions and the Gators split a doubleheader the day before with Clarke winning 10-0 before Kingwood responded with a 7-4 win in game two to set up a rubber match to decide who would advance to the championship game.

Game one ended in a shortened six innings as the Gators dominated from start to finish on their way to a mercy-rule 10-0 win. The first two innings of the game were quiet before Clarke put together four straight innings with at least one run picking up one in the third, three in the fourth, five in the sixth and one in the sixth to complete the scoring.

Dillon Smith got the start on the mound for the Gators and threw a gem of a game allowing just four hits, one walk and no runs while striking out six batters. They also had five guys pick up a hit in the game, four of which were multi-hit performances including a 3-for-4, five RBI game for Pat Dunn. Dunn ended the game with an inside-the-park home run and two doubles.

The Lions were only able to grab four hits, all of which were singles. Garrett Landry, who had a great outing in the quarterfinals, struggled throwing 110 pitches in 4.2 innings and giving up nine runs on eight hits. He also struck out five and walked four in the game.

Kingwood came out looking for revenge in game two and had a complete different focus to start the game as they were nowhere near ready to see their season come to an end.

Clarke, however, struck first in the contest putting up two runs in the top of the first thanks to two singles, a walk and a dropped third strike. This gave the Lions even more determination after digging themselves in a hole. JP Calvert settled in on the mound over the next couple of innings and allowed the offense to make a move.

In the bottom of the third, Kingwood used a walk and four singles from Josh Velo, Calvert, Josh Wright and Noah Seger to drive home four runs as the Lions stormed in front to take a 4-2 lead.

The two teams traded one run innings from the top of the fourth to the top of the sixth, which left the Lions with a 5-4 lead heading to the bottom half of the sixth.  Kingwood was able to add to their lead thanks to a passed ball that allowed two players to come home and score, which gave them a 7-4 lead that they didn’t relinquish.

Seger went 1-for-3 at the plate with a game high two RBIs, while Calvert had a 3-for-3 performance with one RBI and one run scored. Calvert also looked strong on the mound with his team staving off elimination thanks to him tossing 123 pitches and striking out and impressive 11 batters.

A back-and-forth affair in game three came down to a six-run sixth inning for Clarke Prep as they eventually made the score look a lot more lopsided than the game actually was and punched their ticket to the AISA state championship game.

The Gators started the game strong with two runs in the first for the second consecutive game, but Kingwood responded in the top of the third with three runs of its own to take a slim 3-2 lead. The Lions used an error, two walks, two singles and a double in the inning to jump ahead.

Clarke immediately responded in the bottom half of the inning thanks to an RBI groundout that tied the game at 3-3. After a quiet fourth and top of the fifth, the Gators took their second lead of the game thanks to a triple and an RBI single as they went up by one with two innings to play.

Trailing by one Kingwood was still very much in the game, but after they had nothing doing in the top of the sixth, Clarke exploded for four runs in the bottom of the sixth to put the game out of reach at 8-3.

Despite outhitting the Gators 10-9, Kingwood saw its season come to an end. Marcus Norton and Cam Bumper combined to go 6-for-8 at the plate for Clarke including two RBIs and three runs scored.

Seger had another nice game for the Lions going 1-for-3 with two RBIs at the plate while nine different players picked up a hit in the game. Kingwood ended the season with an overall record of 22-11.