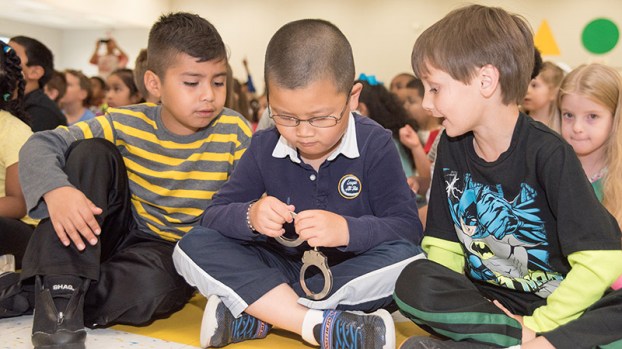 Meadow View Elementary School students get a close-up look at police handcuffs during a May 5 Alabaster Police Department visit to the school. (Reporter Photo/Keith McCoy)

ALABASTER – Meadow View Elementary School’s kindergarten students were full of insightful questions ranging from the type of training a narcotics K-9 officer receives to the purpose behind the equipment police officers carry on them during an Alabaster Police Department visit to the school on May 5.

During the visit, a few APD officers allowed the school’s kindergarteners to get an up-close view at police equipment such as bulletproof vests and utility belts in the MVES auditorium.

“If you call 911 and a police officer is dispatched to your house, this is what they will look like when they get there,” APD Sgt. Susan Peavy said while pointing to officer Hunter Hammonds, who was wearing a blue police uniform, bulletproof vest and utility belt. “They have all of this stuff on their belt they can use in an emergency.”

In addition to passing around vests, handcuffs and utility belts for the kids to examine, the department also gave each student a “Junior Officer” sticker and an APD bracelet. MVES Assistant Principal Taylor Posey kept a good sense of humor, and agreed to demonstrate how officers handcuff suspects.

While the officer equipment was popular, APD K-9 officer Micco stole the show by demonstrating his superior sense of smell when he found and pointed out an imitation illegal substance Hammonds hid inside a folder on the auditorium stage.

“We use Micco for his nose, because he can smell very, very good,” said Hammonds, Micco’s handler.

The APD uses Micco, who was purchased for the department by the Alabaster City School System a few years ago, primarily for narcotics searches, though he also routinely helps locate missing persons.

“He is trained to use his nose very well. Once he does a good job, he will get a reward,” Hammonds said, noting Micco’s reward is either a piece of PVC pipe or a small section of fire hose. “For him, getting to chew on that pipe or hose is the best thing in the world.”

By GRAHAM BROOKS / Staff Writer HELENA–Losing a pet is always hard, but when the pet is a companion as... read more