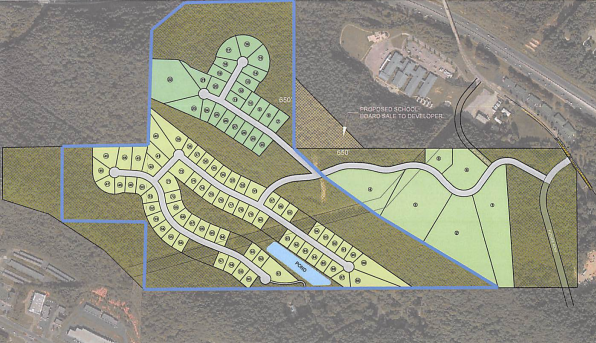 PELHAM – The Pelham City Council conducted a public hearing and the first reading of an ordinance addressing the rezoning of property located off Alabama 33, west of Interstate 65, that if approved, would be turned into a 97-house residential subdivision.

City Council President Rick Hayes said the rezoning request was reviewed by the city’s Planning Commission prior to the May 1 meeting, and the board unanimously voted to recommend approval of the ordinance.

During the public hearing, Goggans explained that the proposed subdivision would consist of plots of land that vary in size. The smallest parcel would be 100-by-150 feet and the average house size on those lots would be about 2,800 square feet.

Lot sizes vary from 100-by-150 feet, 100-by-200 feet and 3 to 5 acre tracts of land, Goggans said. Goggans added that the houses in the neighborhood would be surrounded by greenery to provide more privacy.

Residents who live in the neighborhood southeast of the proposed subdivision voiced concerns at the public hearing about the proposed neighborhood adding to flooding and sewage issues already present in the area.

To address the issue of flooding, Goggans said the neighborhood would include a retention pond, which is designed to catch rainwater runoff and drain it in a titrated fashion so that it does not overwhelm the drainage system.

Goggans said he would also rehabilitate the sewage system in the area to improve its function.

Goggans is also in the process of acquiring 4.8 acres of land from Pelham City Schools. He said the neighborhood, which doesn’t have a name yet, will include road access to the school.