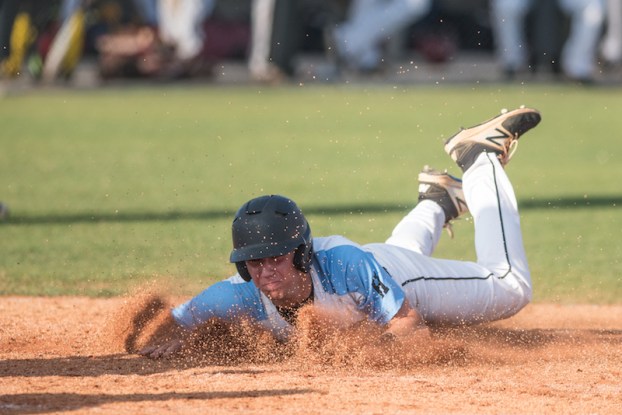 Helena will take on defending 6A state champion Hillcrest-Tuscaloosa tomorrow in a doubleheader with a trip to the championship series on the line. (Reporter Photo/Keith McCoy)

HELENA – This is the week, the week we find out if the Helena Huskies will take advantage of their best baseball season since the school’s inception as they take on defending 6A state champion Hillcrest-Tuscaloosa with a trip to the 2017 championship series on the line.

With losses by Chelsea and Oak Mountain this past weekend, Shelby County’s hope of a baseball championship now rests solely on the Huskies shoulders as they take on the Patriots in a best of three series starting with a doubleheader on Thursday, May 11, starting at 4:30 p.m. at Helena High School.

Through three rounds of the playoffs, Helena has dominated, especially on the mound, outscoring opponents 38-2 including four shutouts and two games with just one run given up. The pitching dominance, as has been the case all season, has come from Riley Davis and Troy Cordrey.

This shows how fresh Helena’s bullpen is if needed, which may be the case against a powerhouse like Hillcrest, but with the way these two guys are throwing the ball it’s hard to see them losing if they can continue this unbelievable trend.

Just six times in 39 games has this team given up more than three runs in a game. That coupled with an offense that can go off on any given night makes this team a tough out, but that being said so are the patriots who are looking for their second consecutive state championship and are now just one series from getting a shot to do so.

While they have given up six more runs on the mound, Hillcrest has scored 67 runs through the first three games showing they have an offense that is going to make both Davis and Cordrey have to earn every out if they want a third consecutive sweep.

Neither team has gone to a game three yet this postseason and with two high profile teams like this that could be the deciding factor on who wins and advances meaning the deeper pitching staff will win the series.

After starting the year 6-5, the Patriots have gone 22-2 over their last 24 games to cement themselves as one of the best squads in the state. Helena, on the other hand, has had that honor throughout the year posting an overall record of 34-5 after winning 26 of their last 28 games.

Whoever does advance will get the pleasure of facing a very good Hueytown or Cullman team, but let’s keep it in the here and now. To win this series it will take a continued strong pitching performance for the Huskies and a little more offensive production, which they finally flashed in their most recent game.

It will definitely be a show you don’t want to miss and it all kicks off tomorrow night at Helena High School.