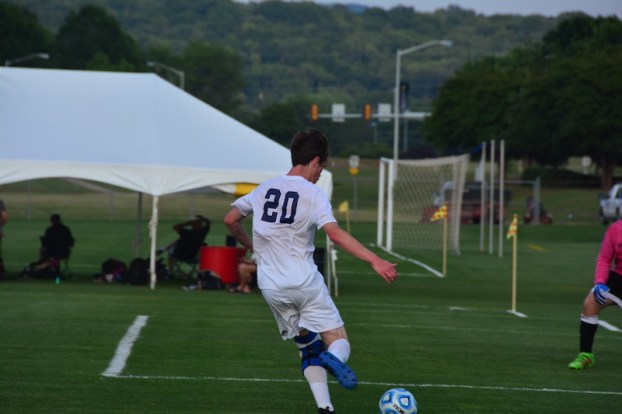 Briarwood's Logan Frost fires a shot during the semifinal game with Andalusia. He was responsible for one of their two early goals in the second half. (Reporter photo/Keith McCoy)

HUNTSVILLE – It was a game dominated by the Briarwood Lions, but the low 2-0 score didn’t show it as the Lions took on Andalusia on Thursday, May 11, with a trip to the state championship game on the line.

After seeing the girls dominated their game just before them with a 6-1 final, the Lions wanted to complete the sweep as they look to bring home the championship crown in both the boys and girls 4A/5A classification.

While the first eight minutes of the game featured a lot of back-and-forth, one thing became evident pretty quickly and that’s that Briarwood was the clear better team.

That being said, the Lions saw several opportunities go array as the Bulldogs were able to hang tough in the first half battling to a 0-0 tie at the break. The Lions, who use more bench players than most normal soccer teams, were much fresher and got several shots inside the penalty box and even inside the goalie box, but just couldn’t get it past Andalusia goalkeeper Franklin Osario.

Just before the half, Briarwood got their best look of the game as the ball hit the goal post before Osario fell on top of it. Once he gathered it, the ball slipped out of his hands and was eventually kicked free right in front of the goal line. After finding its way to a Lions foot, Osario jumped back up and laid out for a miraculous save to hold the 0-0 tie at the break.

Despite the missed opportunity, Briarwood had some momentum going into the second half and it clearly showed when they came out of the locker room.

Within five minutes of the half starting, two sophomores in Logan Frost and Hamilton Bowen found the back of the net to give the Lions a 2-0 advantage, which is all they needed.

Frost’s goal came with 37:32 left in the half after getting loose on the left side. He was able to fire a high shot into the top of the net over Osario’s reach. Bowen added his goal with 35:58 left in the game after getting a shot inside the penalty box.

Briarwood got several more great looks the remainder of the way and outshot the Bulldogs 18-6 in the game as the Lions posed the only real offensive threat the majority of the way.

Briarwood will now move on to face soccer powerhouse Randolph in the championship game tomorrow night at 7 p.m. to conclude Friday’s action.