NORTH SHELBY – According to “Scouting Magazine,” about 6 percent of Boy Scouts earn the Eagle Award, so Griffin Walker of Meadowbrook, 17, was gratified to receive his award on May 6. 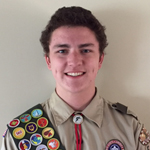 “I guess you’d say I worked on my Eagle for at least six or seven years,” Walker said. “That is how long I’ve been in Boy Scouts. I became a Cub Scout in first grade and a Boy Scout in middle school. I’m happy to get the award, and I hope it will translate into more good things when I apply for college and choose a career.”

Walker achieved the rank of Eagle in March after earning 23 merit badges and completing his Eagle project. He was awarded recently at a special afternoon event at Asbury United Methodist Church, whose congregation sponsors Troop 538, and where his family holds membership.

Walker said he investigated possibilities for a worthy Eagle project, making calls to local schools and churches. It was a visit to the North Shelby Library that sold him on improving the outdoor area adjacent to the main entrance.

He designed, built and installed benches and a picnic table to be enjoyed by library patrons.

Walker also completed his BSA God and Family program in 2011 and was elected to The Order of the Arrow by his peers. He served in various leadership posts in his troop including Senior Patrol Leader.

He also completed BSA lifeguard certification while at summer camp, and has participated in trips to the Florida National High Adventure Sea Base in Islamorada, Florida and to Philmont Scout Ranch in Cimarron, New Mexico.

Walker said he plans to continue in scouting.

“A scout can earn merit badges until age 18,” he said. “And I can continue in The Order of the Arrow as an adult. This is the scout honor society, and members do service projects and provide leadership for younger scouts.”

Walker is the son of Randy and Robin Walker, and a junior at Oak Mountain High School. He’s a member of the National Honor Society, serves on the school’s Relay For Life Committee and plays lacrosse on a local team.

The Walkers also have an older daughter who is a student at Auburn University.