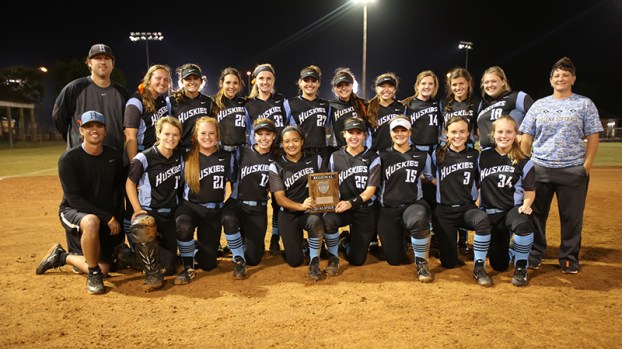 TROY–The Helena Huskies softball team is heading to the AHSAA 6A State Softball tournament for the first time after finishing as a qualifier in the South Central Regional tournament in Troy. Helena won three out of four games in the regional tournament to advance to Montgomery.

The Huskies will be back in the state tournament for the second year in a row but the first time in the 6A classification.

In round one of the AHSAA girls 6A South Central Regional, Helena was hoping to get off to a good start and advance in the winner’s bracket of the tournament.

The Huskies did just that as starting pitcher Avery Barnett pitched another complete game and Helena pulled out a hard fought 2-0 victory over Hillcrest-Tuscaloosa.

Runs were hard to come by, but Helena didn’t need to manufacture many runs with the way Barnett was pitching.

Barnett pitched seven complete shutout innings with four strikeouts as the Patriots had just four hits in the game.

Helena broke the scoreless tie in the bottom of the third inning on a Tamar Watts RBI-single. The inning began with a lead off single from Tori White and she later advanced to third base on a sacrifice bunt and passed ball. White came in to score on the Watts RBI single to make it 1-0 Helena.

The only other run in the ball game came in the bottom of the sixth inning as Katie Lively scored after a Hillcrest error to make it 2-0.

With the win in game one, Helena advanced to round two of the winner’s bracket where their bats came alive.

At first glance from the box score, one would think the 17-7 final was a score from a football game but the Huskies exploded for 17 runs on 15 hits at they 10-run ruled Opelika to advance.

Helena scored four runs in the first inning and six in the second inning to race out to a 10-1 lead in the third inning.

Robertson, Mayfield, Wilson, Maggie Blanton and White all had two RBIs in the five-inning affair.

Game three of the South Central Regional tournament featured familiar foes as Helena and Chelsea met again with the winner advancing to the state championship.

Although Helena swept Chelsea in the regular season, the postseason became an entirely new season in itself, as previous records didn’t matter.

Chelsea was able to pull the upset to win 4-2 and finish as the 6A South Central Regional champions.

Both teams finished with seven hits in the game but Chelsea was able to take advantage of base runners. Helena stranded several runners to finish with just two runs.

Chelsea got on the board first in the top of the third inning on an Allie Miller two-run home run.

In the bottom half of the inning, Helena returned the favor as Robertson also hit a two-run home run to tie the game 2-2.

The deciding runs came in the top of the fifth inning as the Hornets took advantage of three singles to take the 4-2 lead.

Miller went 2-for-4 with two RBIs and two runs scored to lead Chelsea.

After Chelsea grabbed the first state qualifier spot in the winner’s bracket, Helena had to play one more game against Wetumpka will everything on the line. If Helena lost, their season would come to an end but with a win, Helena would take the second qualifier spot to advance to the state tournament.

The pressure of the moment didn’t get to the Huskies as Helena finished with 11 runs on 12 hits to cruise to an 11-3 win.

Helena’s largest inning came in the top of the second inning where they scored six runs to take a 6-0 lead and never looked back.

Helena scored all six runs with two outs in the inning as Watts hit a three-RBI double, Robertson hit a two-RBI double and Lively hit an RBI-single to complete the big inning.

Leading 7-3, Helena also tacked on four more runs in the top of the seventh inning to seal the win.

Barnett pitched another complete game as she allowed seven hits on two earned runs. She struck out two on 118 pitches in the win.

Helena will face Gardendale on Wednesday, May 17 in the first game of the 6A softball state tournament at Lagoon Park in Montgomery.