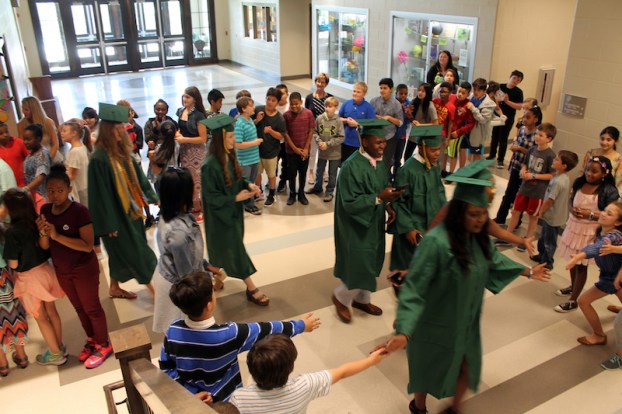 “Next year, we’ll ask seniors and make sure that they’re going to the elementary school where they have family,” PHS science teacher Julie Nelson said. “For today, we’re switching some kids onto different buses.”

Pelham City School buses were departing for the city’s two elementary schools with seniors wearing their graduation caps and gowns, National Honor Society stoles and numerous brightly-colored honor society chords. This new tradition, begun only last year, had no official name so I asked Creative Writing class members what they would call the event.

“Senior March,” Pete Marvin said. Everyone in the class nods and grins.

As only Creative Writers can, Marvin chose this tradition’s name with the exact amount of utility to conjure up imagery. After all, seniors will march through the elementary school halls. The excitement of the event is universal—blanketing everyone—teenagers and grade-schoolers alike. Students receive their caps and gowns in the package, open them on the bus, add the chords they’ve been collecting via their honor society memberships, including a sprinkling of National Honor Society stoles, and finally, the ’17 tassels attach to the caps for the complete look.

Smart phone mirror apps pop open as students see themselves in graduation attire for the first time and plenty of social media posts go out acknowledging the imminence of a new life event. Smiles register between friends, knowing glances reveal the understood, “we did this.”

As the buses arrive, excited elementary school administrators meet us at the door. At Pelham Ridge Elementary School, students line the halls. As the seniors enter in their graduation gear for their Senior March, the elementary students and teachers begin to cheer and the procession begins. Siblings, cousins and neighbors call greetings to their graduates and the younger students reach up for high fives.

As we pass one class, Senior Tlancsy Alameda’s little brother, Marcello Alameda, grabs her in a huge hug beaming with pride over his big sister—the graduate.

“He was hoping you would come to his school,” his teacher says.

“You are our inspiration,” says Marcello Alameda.

By CONNIE NOLEN / Community Columnist “Did your class have senior luncheon when you attended PHS?” I asked Pelham High... read more