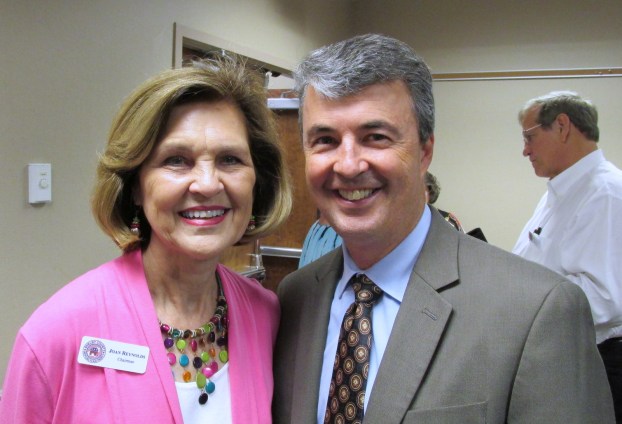 By MICHAEL J. BROOKS / Special to the Reporter

“It’s been an interesting time in our state,” he said. “We had a governor to resign, a new governor taking over, the chief justice was replaced and a special election scheduled for a new senator. I’m no longer ‘new news’ anymore!”

Marshall spoke at the quarterly meeting of the Shelby County Republican Executive Committee on May 9. The meeting was held at the James Alford Jones County Services Building in Pelham. Marshall, 38, is the second youngest Attorney General in the state’s history following his appointment in February.

Marshall joked that some have suggested AG represents “aspiring governor,” but that he had no ambitions beyond his current job.

Marshall said he’s committed to three key principles in his new job, and illustrated each principle with a story.

“First, I have a passion for justice,” he said. “No one is above the law and public safety is paramount for our most vulnerable citizens.”

Marshall told of a one-year-old who died in a Marshall County hospital from blunt force trauma. His caregivers said he’d fallen from his bed, but investigators found the infant’s bed was a mattress on the floor. His wounds revealed he’d been abused for some time.

“We brought a case and made sure those two adults wouldn’t harm children ever again,” he said.

“Second, the law applies equally to all,” he said.

Marshall told of a drug dealer in the county who was murdered when a deal went bad.

“I talked with her mother in the ER before the girl died,” he said. “She told me her daughter’s murderer ‘took away her opportunity to change her life.’ We convicted her killer because this girl deserved justice even though she was a law-breaker.”

Third, Marshall said he believed in doing the right thing in the right way no matter the consequences. He told of prosecuting a law enforcement officer who was taking advantage of women he arrested.

“It was uncomfortable for me to file ethics charges against an officer,” Marshall said. “And his fellow officers were lined up on the other side. But the truth came out. He was convicted and sent to jail because he disgraced a legion of fine officers.”

Marshall said in addition to these three principles, he’d told his staff in Montgomery that though they had a mountain of work to do, they should simply focus on “getting a little better every day.”

“I’m from a rural area,” he said, “and sometimes our citizens get overlooked. Our office is committed to prosecuting heavy equipment theft and ensuring the safety of those in rural areas.”

Another questioner asked about Medicaid fraud.

“We recovered some $17 million last year,” he said. “The legislature has given us an additional tool in the current session and this will help us do even better.”

Marshall said the legislature has also provided for additional troopers.

“Our troopers are short-staffed,” he said. “Highway deaths have gone up, and I’m grateful we’ll have more officers on the highways soon.”

By ALEC ETHEREDGE | Sports Editor HUNTSVILLE – Coming into the Final Four, Pelham’s main speech was that they were... read more