BIRMINGHAM ­-Alabaster resident Drew Ann Long recently celebrated the official release of her book, “Game Changer: The Remarkable Story of Caroline’s Cart,” at a party on Thursday, May 11 at Innovation Depot in Birmingham. According to Long, “Game Changer” chronicles her story as the investor of Caroline’s Cart, the first patented shopping cart specifically designed for older children and adults with special needs.

“This is the 10-year journey of how I identified a need, drew up the plans on a napkin and brought Caroline’s Cart to the market,” Long said. “It was such a difficult journey. There was obstacle after obstacle. I felt led to share this with others.” 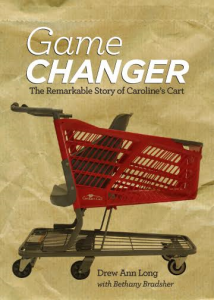 Long said she invented Caroline’s Cart, named for her daughter with special needs, after she experienced difficulties maneuvering both a shopping cart and a wheelchair while grocery shopping.

“When (Caroline) outgrew the standard shopping cart, I couldn’t believe there wasn’t anything for her. There was a huge gap in the market,” Long said.

In 2013, Caroline’s Cart won the daVinci Award. In 2017, it was named as one of the “top 25 companies shaping the future of retail” by the National Retail Federation.

Family friend Michelle Blanton said she has personally the positive impact Caroline’s Cart has had nationwide.

“I was outside of a Walmart in Nashville, and I saw this lady carrying her eight-or-nine-year-old child son with special needs. I told her about Caroline’s Cart, and she was relieved,” Blanton said. “Before Caroline’s Cart, these women had to have one buggy to shop and one buggy for their children. It’s a huge blessing.”

Long said writing “Game Changer” made her even more thankful for her experiences and her faith.

“It was fun for me to relive it and to put it down on paper,” Long said. “I was still amazed at God’s faithfulness through the challenges. He saw us through.”

In addition to being a published author, Long recently started the non-profit, Caroline’s Cause, and has also started booking speaking engagements.

“I hope one day all retailers will provide an equal opportunity shopping experience for parents and caregivers with special needs children and adults by furnishing them the option of a Caroline’s Cart,” Long said.