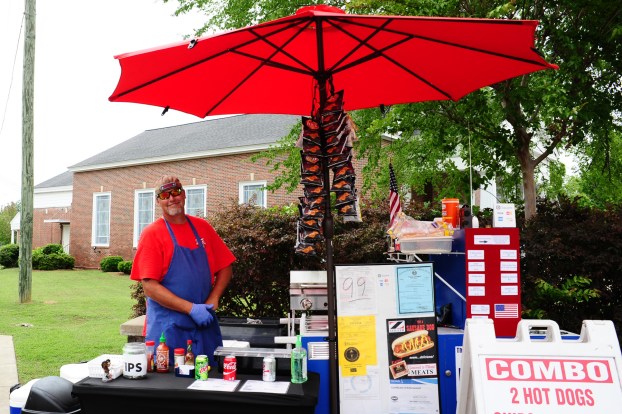 Mark Lollar said one of his favorite parts of his job is engaging with the community. Lollar, who is the owner and founder of the Great American Hot Dog Stand, can usually be seen serving hot dogs from his cart in several cities in south Shelby County.

“With this set up here, I get to interact with you cats. That’s the number one reason I haven’t started a restaurant,” Lollar said. “I’m just a small business owner in America who is trying to make it. I’m really proud of treating people like family and giving them great food.”

Lollar said he was originally inspired to establish his mobile hot dog stand about seven years ago while he was in between jobs.

“I built this cart and scraped together my last bit of money and went all in,” Lollar said. “I found out that, at the time, the Shelby County Health Department was not mobile-food friendly. It was one problem after another. After about $900, I went and got a real job.”

While his first attempt was not as successful as he had hoped, Lollar said he was inspired to try again after food trucks became more popular in the area.

“I just went all in again. The health department was mobile-food friendly, now. Our goal is to provide safe and good food,” Lollar said.

According to Lollar, having a hot dog stand gives people a unique and convenient alternative to fast food, taco trucks or a sit-in restaurant. He also noted that he is the first hot dog stand to ever set up in the city of Calera.

“Logistically, it’s easier, and who doesn’t love a hot dog? I’m not a gourmet kind of guy. This is just straight forward and All-American,” Lollar said. “When was the last time you were able to walk outside and get a good hot dog or sausage?”

Because Columbiana is the Shelby County seat, Lollar recently decided to hold a competition between local offices.

“Every group in Columbiana will put their name in a hat and keep up with the number of hot dogs they buy,” Lollar said.

The winner for each month will have the opportunity to display a trophy, and the office that purchases the most hot dogs for the year will receive a free lunch provided by the Great American Hot Dog Stand.

Lollar said rules and regulations are subject to change at any time “by the one who holds the hot dog holder.”

The hot dog stand is typically located in Calera, Columbiana and sometimes Montevallo during the week. Lollar said he also caters for special events. For more information about the Great American Hot Dog Stand, visit their page on Facebook.

Calera Chick-Fil-A to open in June

CALERA – Chick-Fil-A is expected to open to the masses at 64 Shelby County 304 at the end of June,... read more