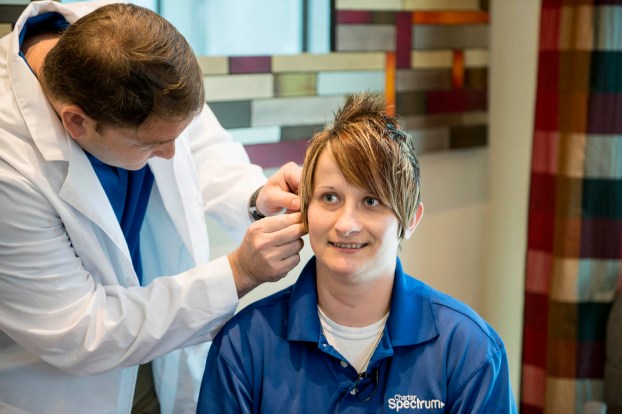 Alabaster resident April Dutton was fitted with a free hearing aid on May 17 through the efforts of the Beltone Hearing Care Foundation. (Contributed/Kathryn Peters Photography)

VESTAVIA HILLS -Alabaster resident April Dutton became able to hear better in her right ear through a hearing aid fitting at the Beltone Audiology and Hearing Aid Center in Vestavia Hills on Wednesday, May 17.

Dutton, who has struggled with hearing issues since birth, received the hearing aid for free from the Beltone Hearing Care Foundation, a nonprofit organization.

“I came unattached from my mother during her pregnancy and had to be taken immediately to surgery. Overall, I had 12 surgeries at birth,” Dutton said in a press release from Beltone. “Doctors who saved me believed the reason for my hearing loss is a direct result from the surgeries and the ton of antibiotics that kept my body from dying.”

While growing up, Dutton said her family lived in a low-income household, which magnified her struggles with her hearing.

“My mother and father did everything they could, but still living in poverty. They could not afford hearing aids for me. All my life, I was given one hearing aid for my left ear,” Dutton said. “I was told that I couldn’t hear enough out of my right ear. They said my percentage is too low.”

Dutton said she found herself in another challenging situation as an adult.

“I am a 35-year-old female who is considered to be lower-middle class. In my eyes, hearing aids are very expensive,” Dutton said. “Throughout my life, I’ve been told by vocational rehab that I could not get hearing aids because I make too much money, so I’ve always had to work extra jobs just to buy one aid for my left.”

Beltone Hearing Care Practitioner John Eddins said the hearing levels in both of Dutton’s ears were fairly symmetrical, but her ability to understand words in her right ear was impaired.

“This could have been a result of her difficulties at birth or due to the fact that the right ear had gone unaided for over 35 years. She simply lost her ability to understand speech in the right ear. She had not lost all of her hearing in the right ear,” Eddins said.

Eddins said Dutton received a binaural hearing aid, which will give her a better awareness of her environment, balance and understanding of the sounds she hears.

While she may have been skeptical of the procedures at first, Eddins said she was one of his favorite patients to work with.

“When I first spoke to Ms. Dutton she claimed she could not hear out of a digital instrument. She had to have analog, which is like going to the Apple store to get a VCR. So I knew going in I had a challenge, but I know I am working with the best available equipment,” Eddins said. “(She was) the sweetest person possible. When I put the first set of demo aids on her in office, her face lit up. I knew right then I could really help her. But through all of that, from the moment I met her she has been the most gracious patient I may have ever had.”

Dutton said she was surprised at “being able to hear clearly and any sound.”

“My left ear is much clearer than before. I’m surprised with the technology, the ability to use an app to adjust them, take phone calls and play music through the aids,” Dutton said. “This will change my life for many reasons: work life, being able to hear in large crowds, restaurants, and outdoors life.”

Movies in the Park returning to Helena this summer

By GRAHAM BROOKS / Staff Writer HELENA–There’s something unique about relaxing and enjoying a movie outside in the summertime as... read more