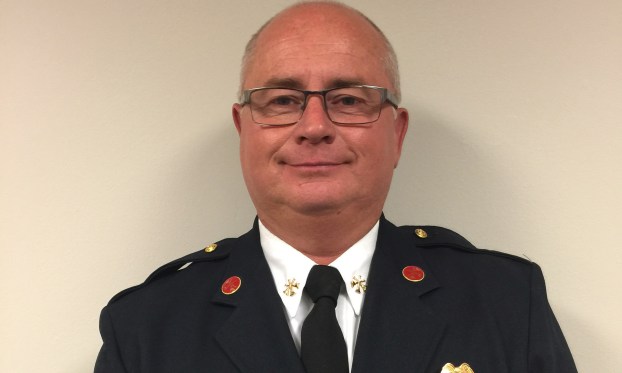 Honeycutt previously held the position of battalion chief. He replaces former fire chief Danny Ray, who retired May 1. Honeycutt is now responsible for about 82 employees, four first-line engines, a ladder truck, two reserve engines, a boat, a Hazmat truck with a trailer, an array of staff vehicles and other specialized equipment.

In the two days since he was hired, Honeycutt has made his first promotion, completed two hires that were already in progress prior to him becoming fire chief and began the process of making his first hire.

“It’s been really good,” he said. “Citizens have been really receptive and the team we have in place here is outstanding. I couldn’t have gone out and hand-selected a better team than what we have here. Our citizens can sleep easy at night with these people here working.”

Honeycutt said his initial goals upon entering the position are to ensure a positive work environment for employees, work toward constructing a new fire station on Shelby County 11, and improve the city’s Insurance Services Office (ISO) rating from a two to a one.

Honeycutt said the construction of a new fire station is in its early stages. The city is currently working with the owner of the Shelby County 11 property to acquire the land.

Honeycutt said he will also be focused on improving the department’s insurance classification rating from Class 2 to Class 1.

“It puts you in elite status,” he said. “It shows that you’ve done everything you can to be your absolute best. There’s such a small percentage of departments statewide that have a Class 1 rating. Based on the team of people we have here, I believe it’s going to happen.”

Honeycutt added that having a low ISO rating lowers insurance premiums for residents and business and property owners.

The ISO conducts reviews automatically every five to 10 years, but Honeycutt said departments can call them to come out for a review if they feel they’re prepared and are trying to improve their rating.

“Later on down the line, as a team we will generate some long term goals that address everything from training to staffing levels,” Honeycutt said.

Honeycutt grew up in Hueytown and moved to Chelsea in 1992. Shortly after moving to Chelsea he became a part of the volunteer fire department at the insistence of his cousin, who is now Chelsea’s fire chief.

“I fell in love with the fire service,” Honeycutt said.

He was hired in Pelham as a dispatcher in 1994 and was hired as a firefighter in 1996 by Waters, who was the fire chief at that time.

“He [Waters] probably doesn’t know it, but he was like a mentor to me,” Honeycutt said.

Honeycutt has a bachelor’s degree in public safety administration from Athens State University and an associate’s degree in fire science management from Shelton State Community College.

He is married to Becky and they have five kids who range in age from 9-27 years old.

PELHAM – Pelham High School will welcome a new assistant principal for the 2017-2018 school year. The Pelham Board of... read more