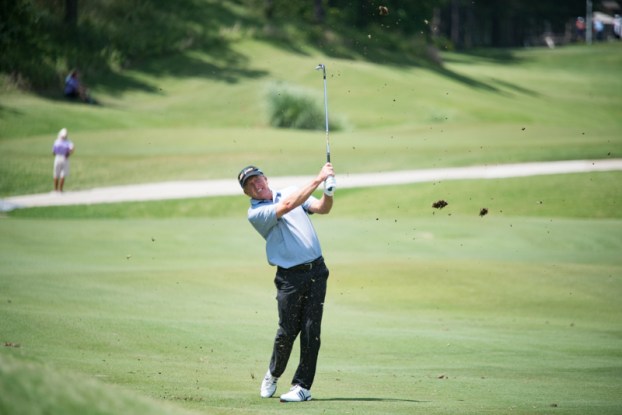 Fred Funk followed his 67 on Thursday with a 65 on Friday to move to 12-under and into first place by himself. (Reporter photo/Keith McCoy)

Funk leads after round two of Regions Tradition

HOOVER – The story on day one of the Regions Tradition was four players shooting 65’s to find themselves in a four-way tie atop the leaderboard as they took advantage of great playing conditions.

On Thursday, May 19, temperatures climbed into the lower 90s as scoring conditions were prime yet again, but on this day, only one man was able to pull off a 65 and it’s the new leader heading into the weekend, Fred Funk, as he made his way to 12 under.

Funk pulled off a 33 on the front nine and a 32 on the back side despite only birdying two of the five par fives on the day, showing that he could’ve gone much lower. None the less, he will take a lead into the weekend in the first major championship of the year on the Champions Tour.

“I played really good,” Funk said after the round. “I’ve been playing well. It’s not that I’m hitting it all that great, but the nice thing is that I’m not giving any shots back because I’m making some great saves.”

Funk went on to say he his back has been a little tight since Wednesday, which caused him to change his swing keys around, but if eight birdies can happen when he’s not swinging the club as well as he likes, then Funk will be scary if he can get more comfortable throughout the weekend.

“I made a lot of my opportunities for birdies by making eight birdies so that’s definitely pretty nice,” he said.

Funk will go into the weekend with a one shot lead over Scott Parel, whom Funk said he had gotten to know really well but had never played with him, which he looks forward to tomorrow.

Parel was one of two guys to fire a 66 on day two of the tournament as he followed up his opening round 67 to get to 11 under par. Parel gained entry into the field when Fred Couples withdrew late last week, and he’s now trying to take full advantage of the opportunity in his first ever Regions Tradition.

“I was trying to get to double digits,” he said of his thoughts going into the round. “I thought if I got close to what I shot yesterday (67) I’d be in good shape.”

This is Parel’s first full year on the PGA Tour Champions as he has never really made much noise, but he looks to change that this week.

“The golf course is in phenomenal shape, the greens are perfect,” he said. “As long as the weather stays decent, there’s a lot of birdies to be made out there.”

The weather is something to keep an eye on, however. If you plan on making the trek out to Greystone Golf and Country Club tomorrow tee times will be moved up and take place between 7 and 9 a.m. and players will go off both No. 1 and 10 tees.

It should be a fun weekend of action though as 44 players remain under par and 17 are within six shots of the lead.