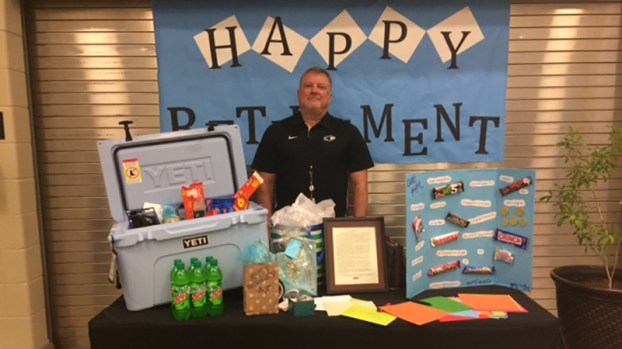 A celebration was held to honor Helena Middle School Principal Scott Knight on Friday, May 19. Knight is retiring from HMS after many years working in education. (For the Reporter/Erika Bibbs)

Special to the Reporter/ Erika Bibbs

HELENA–A retirement celebration for Scott Knight was held on May 19, at Helena Middle School. He was honored by his colleagues and friends in the school’s cafeteria.

What he will miss the most working as a principal is the people of Helena. “The students, the community, the teachers, you name it; it’s just a big family here and that’s what I will miss.”

Knight plans to enjoy his retirement life in Nashville, Tennessee for the summer. He isn’t exactly sure how he’ll spend his summer there, but he will definitely have plenty options. “I don’t know what I’m going to do yet, but I have tons of options,” he said. “I just have to choose what I want to do and that’s the best part about retirement; you can choose what you want to do now.”

His best memories about Helena Middle School are with the students and parents. Especially, the phone calls and visits of former students and the parent’s genuine involvement and gratitude. “I have been very blessed to be supported by the parents and students here. They’ve always been behind me.”

Knight will also miss the memories he’s made with his colleagues and he’s thankful to have been a great leader to them. They have shared nothing but positive remarks about him as a principal.

Keith Richardson is one of many grateful faculty members under Knight’s leadership. Richardson is a computer teacher and an assistant basketball coach at the school. “We’re all going to miss Scott so much,” Richardson said. “He’s such a wonderful guy and a terrific leader for our school. He’s such a great supporter for the teachers and an advocate for the students. He is a special guy and we appreciate him.”

Another colleague is Renee Holley, a special education program area specialist who has had the pleasure of working with him as well. “We have a great working relationship. He’s very collaborative in making decisions, especially with the special education department. He includes me in a lot of decisions in terms of anything that has to do with special education,” Holley said. She will miss his personality and the friendly rivalry between them during the Iron Bowl.

Amy Bright, an interventionist specialist, recalls Knight as an excellent leader during her nine years working with him.

“He is a wonderful boss as well as a good friend,” she said. “I’m so glad that my three children were under his leadership as an assistant principal and a principal.”

Knight’s retirement reception was from 3:30 p.m. until 5:30 p.m. Faculty and students presented a tree to him dedicated in his honor as well as gifts, posters and cards.