Police: Man barricaded self inside home of victim

HARPERSVILLE – A Harpersville man was arrested on May 19 and charged with aggravated stalking after he allegedly barricaded himself inside the home of a victim and said police would “have to kill him” to get him out. 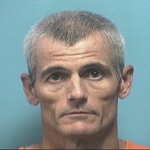 Cato’s bond was set at $225,000 by Shelby County Circuit Judge Lara Alvis after he was arrested by the Harpersville Police Department.

According to court documents, Cato broke into and barricaded himself inside the victim’s Harpersville residence on May 19.

“He stated that the police would have to kill him to get him out,” reads the district attorney’s bond recommendation in the case. “He then broke into the room where [the victim] and her son had gone to escape him. When police ordered him to come out, he told them they would have to kill him, and when they entered the house, he fled out the back door, had to be chased and subsequently was caught and arrested.”

The incident was Cato’s second violation of the protection from abuse order in five days, according to the bond recommendation.