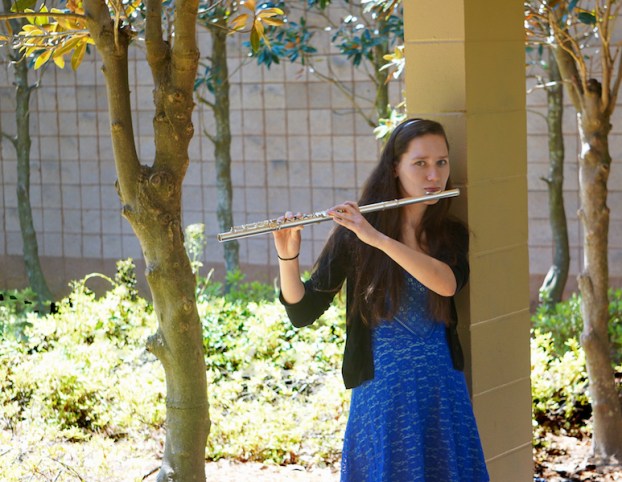 By LAURA BROOKHART / For the Reporter

Gillian Ash has maintained a 4.52 GPA at Briarwood Christian School but is most known for her passion for music.

Having played flute in the Briarwood Band program since fifth grade, she recalls, “I just always wanted to play flute and my parents gifted me one for Christmas that year. I didn’t naturally know how to make the mouth shape to produce a note; in fact, my mom started me on a Coke bottle.”

Her parents, Darren and Traci Ash, may have contributed to her musical appreciation, as Darren plays the trumpet and Traci plays bassoon and saxophone. Her older sister, Morgan, also played clarinet at Briarwood.

Following in her parents’ footsteps, Ash will attend Auburn University and plans to double major in flute performance and pre-veterinary medicine. She will also be a member of the Auburn University Marching Band.

Ash continues private lessons with Janis Nichol and plays at an annual recital each May for friends and family.

“My first band director was Jim Knight, a very enthusiastic director who pushed me to keep going. I wouldn’t be here today without his encouragement,” she said. “I love going on band trips where we get to perform and march. We recently went to Universal Studios. On such trips we perform but also get to relax and have fun. There are many different and interesting personalities in our band. Our band is a big family.”

Ash says she considered a stage role in the Drama Department productions of “Into the Woods” and “Bye Bye Birdie,” but smilingly says she is most comfortable “playing in the pit” alongside other professional musicians.

During the past four years, she was a member of the Samford Honor Band, Auburn Marching Honor Band and Auburn Symphonic Honor Band.

Ash accompanied the Briarwood Elementary choirs during their 2016 Christmas concert, and she played at the funeral for Briarwood teacher Dennis Glass.

She also played at her grandfather’s funeral.

“My grandfather’s favorite song was ‘Musicbox Dancer’ by Frank Mills, so that is what I played on flute accompanied on piano by Joel Mixon,” she said.

Mixon, a radiologist and musician, himself, has been a great mentor and inspiration for Ash. She credits his influence for her decision to work for a double major at Auburn.

“It will be a lot of work – people have told me that pre-med alone is very challenging – but I have wanted to be a vet from as long as I can remember, because I love animals,” she said.

Another of Ash’s loves is Baroque music. At recital, she will be performing George Phillip Telemann’s Vier Sonaten (Four Sonatas) as well as Sonata by Otar Taktakishvili, The Swiss Shepherd and Hora Staccato.

For her final English project, Ash plans to illustrate God’s Grandeurs with a slideshow series of her nature and animal photographs; she hopes to also write and play the piano for the accompanying music.

“I used to be an extremely shy person,” Ash says, “But getting into music has forced me to be on stage and I credit it for bringing me out of my shell.”

By EMILY REED / For the Reporter  Senior Garret Landry enjoys being a leader, and giving back to his community.... read more