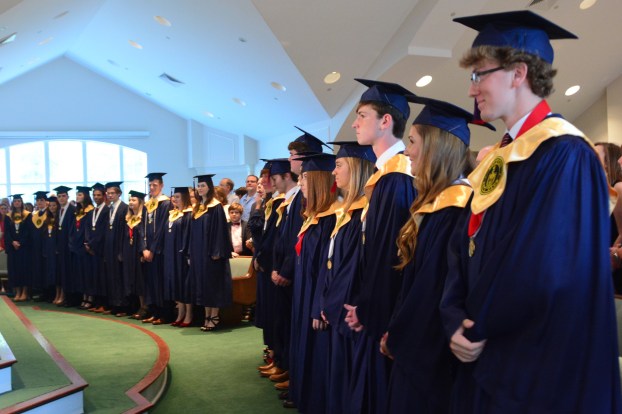 ALABASTER- All 22 members of the Evangel Classical Christian School class of 2017 were recognized at a graduation ceremony on Friday, May 26 in the sanctuary of Evangel Church PCA in Alabaster.

The ceremony began with a procession of ECCS faculty and graduation candidates, which was led by piper Ryan Morrison.

During her address, salutatorian Molly Mitchell spoke about the obstacles her class has overcome over the years.

“Many of us have been together since preschool, and we are a very close-knit group of students,” Mitchell said. “Our class has experienced an unprecedented number of changes throughout the year. It is safe to say our senior year was not what we expected it to be. We all went through some pretty hard times, one way or another. Our strength and resilience was tested beyond what any of us expected. However, as one curveball came after another, we had each other’s backs.”

Guest speaker and Westwood Baptist Church Worship Leader Kevin Derryberry began his speech by singing a rendition of “What a Wonderful World,” by Louis Armstrong. He urged graduates to stay resolute in their Christian faith in the face of adversity.

“I know how you are. You are fearfully and wonderfully made by the most high God. You have been trained and taught. You know God’s word,” Derryberry said. “You’re going to face all kinds of oppositions about your faith. You have all you need.”

According to Logic and Rhetoric Principal Melissa Bell, the passage of the Bible that was chosen for students during this academic year was Joshua 1:9: “Have I not commanded to you? Be strong and courageous. Do not be frightened, and do not be dismayed, for the Lord your God is with you wherever you go.”

Bell spoke about each graduate’s virtues, accomplishments and future plans as they walked into the audience to deliver flowers to their families. Once all graduates were presented, they and their loved ones viewed a presentation of photos throughout each graduate’s childhood.

In her address, valedictorian Lindsey Downs cited the efforts and accomplishments of Walt Disney to encourage her fellow graduates to never give up.

“Success often begins with a dream, and that was certainly the case for Walt Disney. Walt Disney and his brother, Roy, built their company from the ground up,” Downs said. “Now, it is our chance to be a Walt Disney in the world. We are opening a new chapter in our lives, a time when God will shape us and point us in the direction that He wants us to take. Now is the time for us to take hold of our ideas, and our dreams, and make something out of them.”