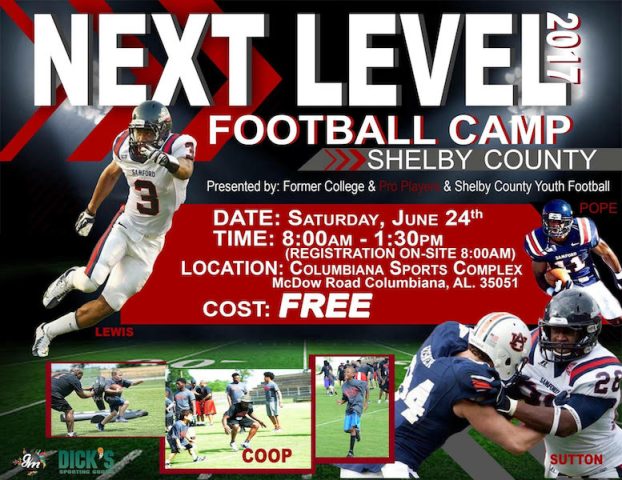 Jeremy Towns will bring his Next Level Football Camp to the Columbiana Sports Complex on Saturday, June 24. (Contributed)

COLUMBIANA – As a graduate of Wenonah High School that made it to the NFL, Jeremy Towns is a local hero of sorts to the local Birmingham community.

While his NFL career was short lived over a two-year span with the Buffalo Bills, Washington Redskins and Philadelphia Eagles; Towns is taking the lessons he has learned and applying them to new challenges in life, including preparing the next generation for similar challenges.

Not only a graduate, but a Valedictorian of his 2008 graduating class, Towns showed he had the smarts to go along with his strong natural playing ability on the football field. He took that work ethic with him to Samford where he became not only a star on the field, but in the classroom.

All but ready to go to medical school at the University of South Alabama, Towns got a call from the Buffalo Bills offering him an undrafted free agent deal to join the NFL team.

With his NFL dream coming to an end so shortly, Towns decided to follow up on his dream of going to medical school as he is now enrolled at the University of South Alabama chasing after a medical degree.

But it’s not chasing after his own dream that makes him the man he is, it’s helping other young people realize their potential to chase after something they desire. Whether it be in the classroom or on the football field, Towns is doing his part in helping them be prepared for anything that can be thrown their way and having been through it all he is the perfect person to do so.

After two bad injuries, a sports hernia and a high ankle sprain, Towns football career was in disarray, but he was able to battle back and eventually find a spot in the NFL. When the NFL didn’t work out, he didn’t panic, but instead knew he had other options thanks to his hard work in school.

While he travels around to many different schools helping counsel students both academically and athletically, he also hosts a football camp known as the Next Level Football Camp. Towns will bring this camp to the Columbiana Sports Complex on McDow Road.

The camp will take place on Saturday, June 24, from 8 a.m. to 1:30 p.m. with registration taking place on site at the start of the event.

He will bring along with him several former college teammates as well as other former professional players. The camp will feature age groups from 7-18 and the most important part is it comes at no cost.

Towns does it simply to help prepare these kids as he puts them through a day of football drills while sharing advice and keys to success, all in a fun environment for the students.

Towns has done many things for many communities all out of wanting to reach youths and help them make the right decision. Columbiana is the next level on his climb to making a difference.

By ALEC ETHEREDGE | Sports Editor It’s hard to believe it’s all over with. It seems like just yesterday, I... read more