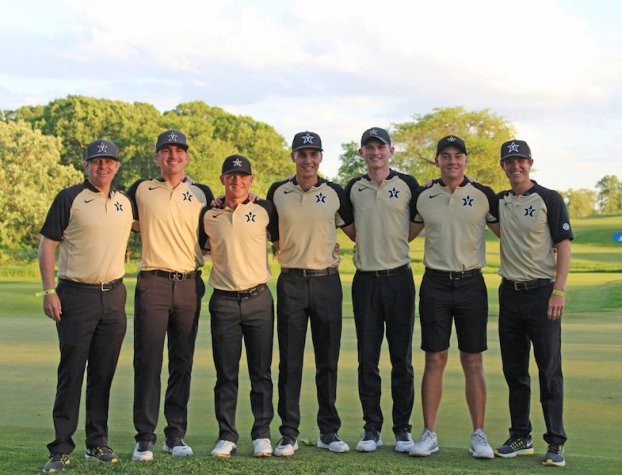 NASHVILLE, Tenn. –  Vanderbilt’s men’s golf team is in the midst of a national championship run as they took home first place in the 2017 stroke play portion of the event after finishing 13-under par in the four-day competition.

They won the event, held at Rich Harvest Farms in Sugar Grove, Illinois, by 12 strokes over 1-under Oklahoma. The win gave them the No. 1 seed heading into match play, which puts the Commodores in good shape to win an overall national championship as they sit three match play rounds away from the title.

While the all-around team is the best in school history, with the top four scoring average leaders in school history all being on the roster, former Spain Park standout and Vandy sophomore Patrick Martin is leading the charge.

Martin is just in his second year with the Commodores, but already holds the school record for stroke average through two seasons of stroke play with an average of 70.54.

During his freshman season, Martin posted a stroke average of 71.18, while being named to the All-SEC Second Team and All-Freshman team after a season that featured five top-10 finishes.

He only improved during his sophomore season, lowering his stroke average to 69.68, which not only led the team, but is the lowest in school history. Martin’s strong play has already led him to an All-SEC First Team appearance, a runner-up finish in the SEC Championship (in which he lost a playoff for the individual title), six top-10 finishes in 11 events, a season-low finish of 21st and an SEC team championship.

Martin, pictured here during his Spain Park days, has established himself as one of the top golfers in the country in two years with Vandy. (File)

His runner-up finish in the SEC Championship at Sea Island Golf Course April 21-24 helped not only lead Vanderbilt to that SEC Championship, but history as it marked the first in school history.

Martin has also been racking up several top individual honors. Most recently he was named as a First Team All-American by the Golf Coaches Association, which was added to winning the second annual Tom Cousins Award.

The Tom Cousins Award steps away from the fascination of how you perform on the golf course and takes a look at the good you can do off of it.

After his grandfather died of bone cancer in 2009, Martin decided to create a charity golf tournament in his honor. The tournament started and 2010 and has continued every year since, raising more than $36,000 for the St. Vincent’s Bruno Cancer Center in Birmingham.

Adding to his list of already impressive awards, Martin was recently named as a finalist for one of the most prestigious awards in collegiate golf, the Jack Nicklaus National Player of the Year Award. He is one of five finalists, and along with that comes a lot of promise for his young career.

In addition to the award winner, all five recipients will compete in the Barbasol Shootout for an exemption into the PGA Tour’s Barbasol Championship, held July 20-23, at the Robert Trent Jones Golf Trail at Grand National in Opelika. The Barbasol Shootout will be held Saturday, June 3, at the storied Scioto Country Club in Columbus, Ohio – the same club where Jack Nicklaus first learned to play the game under legendary teaching professional Jack Grout.

Last year’s winner of the award was none other than Jon Rahm, who has since turned pro and taken the PGA Tour by storm in his first year as a professional. The crazy thing is Martin is just a sophomore and is already establishing himself as one of the top up-and-coming golfers in the country.

Coming out of Spain Park, Martin was ranked as the 19th best player in the class of 2015 as he won the Alabama State Match Play Championship and the 7A individual state championship during his senior season with the Jags.

While all of these awards and statistics are great, and most likely mean a bright future for the young man, the focus of he and his historic Commodore teammates is to win a state championship over the next few days.

Update: Today, Tuesday, May 30, Martin made a putt on the 18th hole to win his match 1-up over UNLV’s Harry Hall. His win helped propel the Commodores to a tight 3-2 win over the Rebels as Vanderbilt advanced to the semifinals of the match play portion of the championship.

By ALEC ETHEREDGE | Sports Editor COLUMBIANA – As a graduate of Wenonah High School that made it to the... read more