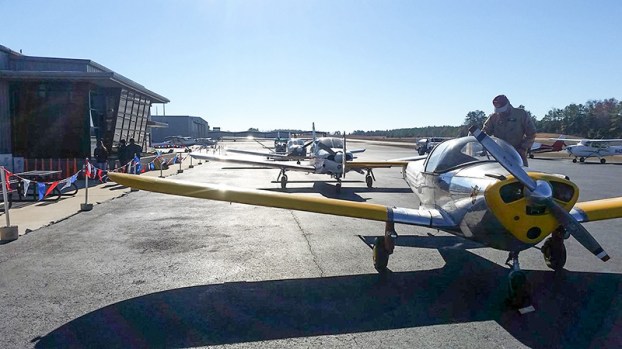 Airplanes line up at the Shelby County Airport during a previous Young Eagles Day in December 2016. Local kids will have a chance to fly for free during the next Young Eagles Day on June 10. (Contributed)

Kids between the ages of 8 and 17 will have another chance to take to the skies for free at the Shelby County Airport this summer, after inclement weather canceled a previous airport event scheduled for May 13.

The Shelby County EAA chapter originally was set to host its spring Young Eagles day on May 13, but has moved the event to Saturday, June 10, due to weather.

During the day, several local pilots with the Shelby County Chapter of the EAA will take kids on free flights lasting about 20 minutes. Flights will begin at 10 a.m., and will run continually through about 1 p.m.

The Shelby County Airport has held several previous Young Eagles flight days, including one last December, and has seen between 50 and 80 participants in each class. During the event, local pilots will have a variety of small one- and two-engine planes on hand to fly the kids.

In the past, the Young Eagles events have drawn more than 100 kids.

Flights are free on Young Eagles Day, but participants must fill out a registration form in advance – indicating desired flight time – and bring it to the airport on the day of the event. Registration forms are available at the Shelby County Airport terminal, or by emailing ShelbyEAA825@gmail.com.

A parent or guardian must be present at the airport for their children to receive an airplane ride.

The national EAA regularly sponsors Young Eagles Day programs at airports across the country in an effort to eventually combat a growing shortage of commercial pilots entering the workforce in the future, according to local EAA members.

By STEVEN CALHOUN/Staff Writer The Montevallo Chamber of Commerce held its Annual Community Picnic on May 25 at Parnell Memorial... read more