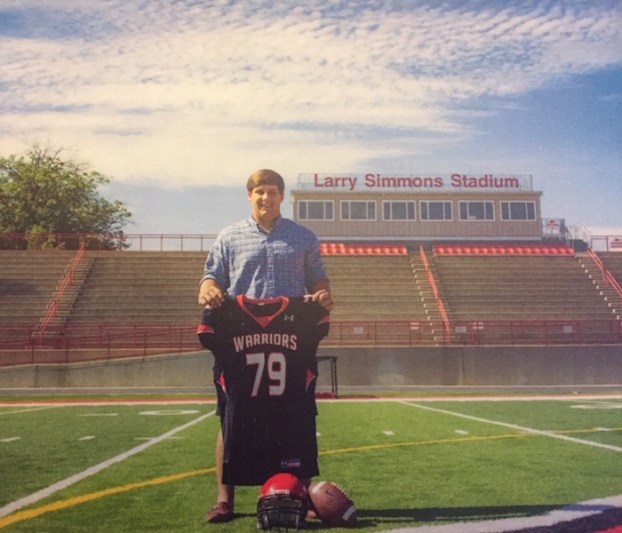 Thompson High School senior Tyler Couch was involved in the THS football team and the track and field programs. He will play football at Birmingham-Southern College and plans to pursue a degree in pre-medicine. (Contributed)

While sports was a major focus for Tyler Couch during his time at Thompson High School, he did not neglect his grades or pursuit toward academic success.

“When I look back at my time in high school, I am thankful that during all four years whenever I was having football and school at the same time, I had so much support from the teachers and coaches to help me keep my grades up,” Couch said. “I really liked how at Thompson, the football coaches strive for academics before sports, which was very important to me.”

Couch has been an integral part of both THS’ football team and track and field program.

Couch, who played left guard, officially signed on Feb. 1 to play football in the fall at Birmingham-Southern College.

“I knew I always wanted to play football in college, so it is exciting that I will have that opportunity in the fall,” Couch said.

Couch also plans to pursue a degree in pre-med with an ultimate goal to earn a degree in sports medicine.

While Couch admits his time in college will likely be busy with both sports and academics, he credits his time in high school to teaching him how to prioritize his time.

“I have learned that while it was hard at first to find a balance, it eventually became a lot easier, and now I do it every day so I know what to expect,” Couch said. “I know it will be hard in college, but I will have some great support.”

“I have really enjoyed helping others out and giving back to the community,” Couch said. “Whatever the project we were working on at the time, we always tried to figure out a way to help others when they needed it.”

Couch said he will definitely miss the school spirit at THS, which provides a happy energy each day.

“I am used to coming in and everyone is just really happy to be here,” Couch said. “We have amazing school spirit and I am definitely going to miss that.”

Couch is the son of Mark and Kim Kielbasa and has a sister, Kristin Bachmann.

By SAMANTHA HURST / For the Reporter Taylor Hinch finds herself drawn to making life better for others. “When you surround yourself... read more