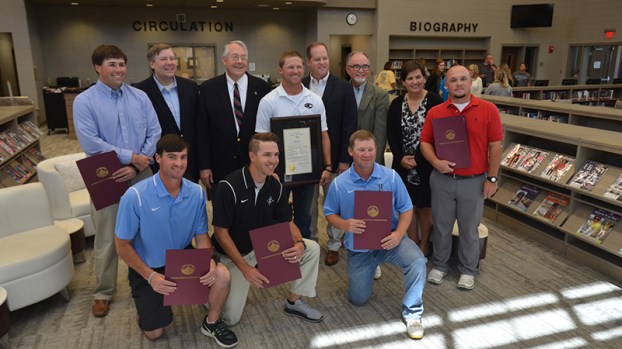 Members of the Alabama state legislature presented the Helena High School baseball coaches and players with certificates and a resolution on May 25, after the Huskies defeated Cullman to win the 6A state championship. (Reporter Photo/Graham Brooks)

HELENA–The awards and recognition keep piling up for the Helena High School baseball team after winning the AHSAA Class 6A state championship a few weeks ago.

On May 25, various state representatives and members of the state delegation traveled to Helena High School to congratulate the players and coaches of the baseball team, while also presenting them with a resolution and certificates.

“I know you did a lot of hard work to get where you got to this year and the success you had, but what’s even more remarkable is that I was talking to the principal about how young of a school this is,” Ward said. “There’s schools around here that have been around for decades and have never achieved what you did in such a short period of time. I think it’s admirable and we’re all from the bottom of our heart just amazed at what you did.”

“There’s a lot of blonde hair in here,” Fridy said jokingly. “I enjoyed reading as the season progressed the things that y’all were doing getting ranked in the top five in the country at one point and that’s phenomenal. If I understand it correctly, the season ended on the warning track, which was amazing. We had several of our friends from Cullman tell us ‘There was no way Helena was going to win. Cullman has the No. 1 draft pick and there’s no way Helena can win.’ I was so excited to walk back in that area of the house floor and say ‘I told you guys!’”

After saying a few words and congratulating the team, Mooney read the Senate Resolution that was presented to the team from the Alabama Senate and Alabama House of Representatives.

Also in attendance was Helena Mayor Mark Hall who also presented the team with another keepsake.

Hall revealed new banners that would be going up along certain streets in the city to commemorate and congratulate the state championship.

The banner read, “Welcome to Helena, Home of the Huskies” and listed the AHSAA state championships for the soccer and baseball teams.

With the state championship win, the Helena High School baseball team also reached 100 total wins as a program, a feat the players and coaches were also proud of.

By ALEC ETHEREDGE | Sports Editor It’s hard to believe it’s all over with. It seems like just yesterday, I... read more