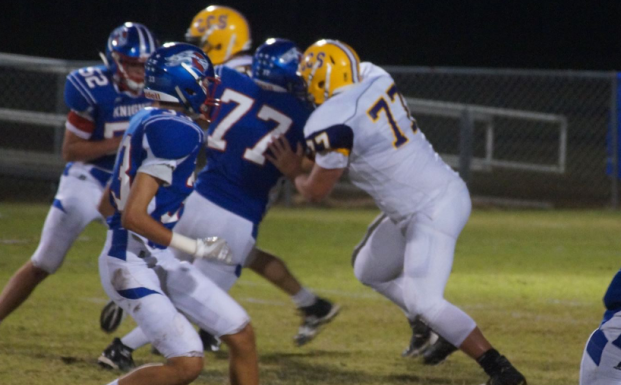 Cornerstone’s Landon Guy, No. 77 in white, makes a block during the 2016-17 football season. He has since earned an invite to the Blue-Grey Combine at AT&T Stadium in Dallas, Texas. (Contributed)

Cornerstone Christian School’s Landon Guy has been an anchor on the Chargers offensive line and has conquered several defensive linemen over the last couple of years as a rising senior.

Guy’s next conquest? Competing in an NFL stadium. The lineman was selected to attend the Blue-Grey National Southwest Super Regional Combine at AT&T Stadium June 24-25 in Dallas, Texas. AT&T stadium, also known as “Jerry World,” is home to the Dallas Cowboys and considered to be one of the nicest NFL stadiums in the country.

While Guy is living out a dream by traveling to compete in an NFL stadium and work hard, the opportunity can be a prelude to bigger things if he does well.

“It’s an honor to be selected to participate in this event,” Guy said. “If it all stops in Dallas and I go no further, I will always thank God for the experience he has given me.”

As a junior and second-year starter in the fall of 2016, Guy established himself as the biggest offensive lineman on the team standing 6-foot-4, and nearly 280 pounds. He was a big part of a team that went 8-2 last year.

During the postseason team banquet, Guy was awarded the 2016-17 lineman of the year by his Cornerstone coaches and teammates.
If Guy performs well enough in Dallas, he will be in a great position to be selected to play in one of the Blue-Grey All-American Bowl games played at three different NFL locations and featuring several of the country’s best football players.

To earn that spot he will have to do well in front of coaches at the combine that are made up of NFL veterans and team-experienced scouts.

That would lead him to one of the three bowl games to take place at either Raymond James Stadium, EverBank Field or AT&T stadium.

“We’re just all so happy for him and can’t stop smiling at this achievement that he has been able to accomplish,” Guy’s mom Krista Guy said. “Being from a small town and school this is very exciting for us.”

The 2016-17 Cornerstone team featured just 24 players and just three senior showing just how small it is. Guy still somehow outshined a lot of people in the state and the country as he was able to protect quarterback JoJo Joiner and company with ease.

By ALEC ETHEREDGE | Sports Editor Pelham – Coming off one of their most successful seasons in school history, the... read more