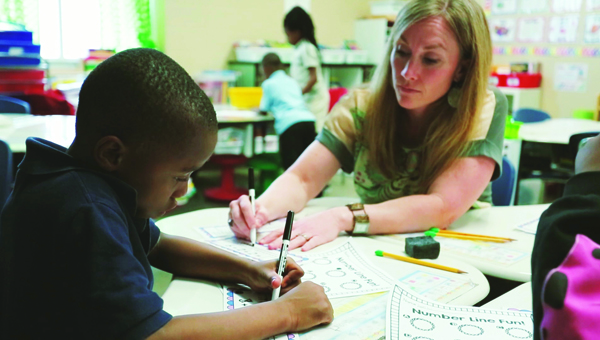 HOOVER – The Church at Brook Hills has been ministering to the people of Birmingham’s Gate City since 2010 and is preparing for another back-to-school benefit event in July.

The event for the school’s students, staff and families will include food, fun and fellowship.

Students will have the opportunity to use points earned at school to “purchase” new school supplies, uniforms and shoes.

Points are earned through attendance, improvement, parent involvement and other efforts determined by school officials, according to The Church at Brook Hills Local Missions Pastor Keith Stanley.

“Our goal is that every child has a sense of dignity and achievement,” Stanley said.

Ready Day One is one of many efforts under the Love Oliver initiative.

The programs include in-school mentoring, after-school academic intervention and even off-site Bible study.

Stanley said the effort is “people-driven, not project-driven.”

The efforts are facilitated by a number of missions in addition to Brook Hills, including Oak Tree Ministries, Aspire Movement, Discover Clubs and Serving You Ministries.

“We realized this is bigger than Brook Hills,” Stanley said.

Love Oliver began with the Ready Day One concept in 2012.

Stanley said the Marks Village community, which sends its children to Oliver, is one of the largest and poorest areas in the city with an average income of $6,200 per family unit. Almost all of the about 450 children attending the school are part of the federal lunch program.

“We just felt like God was calling us there,” Stanley said.

An early revelation for volunteers was that the children attending Oliver fell behind because they were unprepared.

“We realized a lot of these kids weren’t starting school on Day One,” Stanley said about a lack of uniforms and supplies.

Brook Hills joined with Mission Alabama and encouraged other churches to do the same.

Churches local to the Gate City area, such as New Rising Star Missionary Baptist Church, are also pulled into the effort, helping distribute school supplies and other tasks.

“We want them to have a sense of community in their community,” Stanley said.

The Church at Brook Hills set and met a fundraising goal of $40,000 to provide the necessary items, but Stanley said donations are welcome year-round because they can also be used to provide support to teachers during the school year.

“These teachers need all the help they can get,” Stanley said. “We want to come alongside them in this journey.”

Stanley said Love Oliver has benefitted church members by providing perspective and helping them grow in their faith.

“It’s been incredibly rewarding for us,” he said.

Visit BrookHills.org/LoveOliver for more information about the efforts. Anyone outside the church wishing to help should call the school at 231-8620.

By GRAHAM BROOKS / Staff Writer ALABASTER–School may be out for the summer for students, but the Shelby County Board... read more