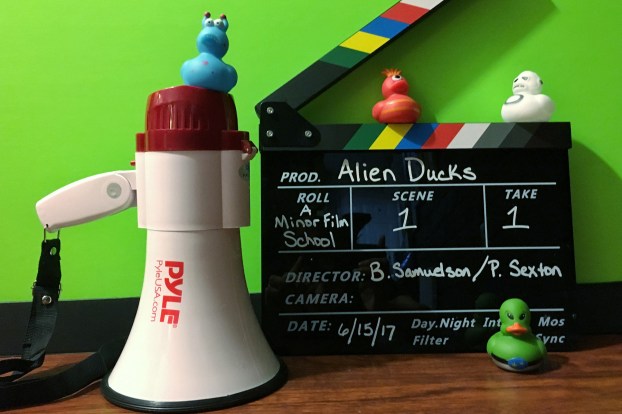 During A Minor Film School’s filmmaking classes, students will be able to learn about planning, shooting and editing a short film while expressing their creativity. (Contributed)

CHELSEA- Youth from the sixth through 12th grades will be able to learn how to plan, film and edit a short film, all via mobile device, at A Minor Film School’s second annual summer filmmaking course. A Minor Film School will begin offering beginner and advanced classes at the Chelsea Community Center on June 15.

“She was inspired by an alien-looking rubber duck that she got from a claw machine. I’ve taken Betsy’s idea and some input from her and developed that into a short script,” Ivey said. “It’s based here in Chelsea, and it’s about an invasion of tiny rubber ducks from outer space. They’ve come into contact with a food item that was accidentally discarded by astronauts, and they’re obsessed with learning the secret of this particular food.”

According to Ivey, making the short film will involve the Chelsea community by placing all of the filming within city limits and using locals as actors. Ivey said the classes will also place a special emphasis on asking for permission to film at places and budgeting.

“I’m trying to model good filmmaking behavior. We’ve been going through the process of asking permission before we shoot in various places,” Ivey said. “I love the limitations that [the budget] is going to place on them.

Ivey said the classes will allow students to use everyday items that they have grown up with, like iPhones and iPads, and use them to express their creativity.

“Kids nowadays always have their phones with them. That generation has grown up photographing and documenting everything that they do, so why not give them a skill set that will allow them to take a tiny idea and make it into something a lot bigger?” Ivey said.

Ivey thanked the Chelsea Kiwanis Club, which donated $300 to the program and will provide T-shirts for students. She also expressed her appreciation for Chelsea Public Library Director Dana Polk for including the classes in the library’s summer reading program.

“She is a huge supporter of ours. I love it being sort of under their umbrella,” Ivey said.

Basic classes will take place from 9 to 10:30 a.m. and advanced classes will be held from 11 a.m. to 1 p.m. on June 15. For more information about the program or to register for classes, visit Chelsealibraryonline.com.