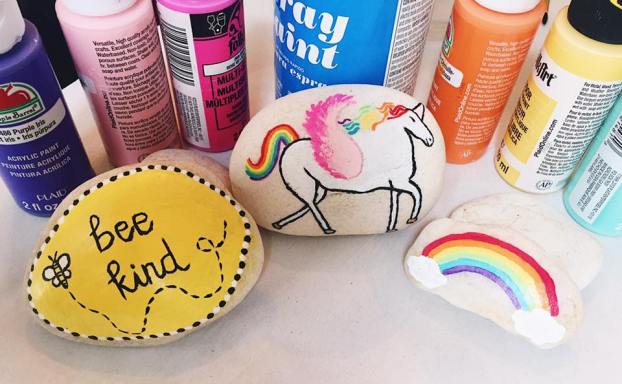 Rocks with painted designs are appearing throughout the city of Chelsea as part of a growing project called “Chelsea Rocks.” (Contributed)

Chelsea rocks on with inspirational project

CHELSEA-A painted rock project is gaining momentum throughout the city of Chelsea, spreading happiness and good cheer to those that search for it.

“It has really just taken off,” said Darla Pair, the creator of Chelsea Rocks. “There are towns all over the United States participating, and it has been a lot of fun seeing the response to those living in Chelsea.”

The project is simple, requiring rocks of any size, or shape to be painted with any colorful picture, inspirational message, or drawing, with “Chelsea Rocks” written on the bottom of each rock.

The rocks are then dispersed throughout the city for those wanting to find them, take pictures of them, and upload them to the Chelsea Rocks Facebook page.

Pair said the idea originated for the Chelsea project when her and her two granddaughters took a recent trip to Townsend, Tenn.

“One of my granddaughters found a rock in a business window, and the business owner explained to us about Townsend Rocks,” Pair said. “They told us that cities all over are starting to participate in the project and we liked the idea so much we decided to create one for Chelsea.”

Pair and her granddaughters started painting rocks with various designs using acrylic paint and scattering the rocks throughout Chelsea for others to find.

“On the bottom of every rock we wrote ‘Chelsea Rocks Facebook’ so people would know to go look at the Facebook page,” Pair said. “In just two weeks we have had over 200 people join, and we have already had a few people take our rocks to other places like Florida and hide them there. We are really excited to see all of the places people will take our rocks.”

Pair said the project is a good way for families to have an activity to participate in, and individuals of any age can join in on the fun.

“All you have to do is find a rock, and paint it,” Pair said. “We do have a rule on our Facebook page that says you can not write any offensive language or picture. This is meant to be something positive for people to enjoy. Since other cities across the United States are participating, people can take rocks to other cities and hide them there, or they can create rocks and place them throughout Chelsea for others to find. If you like a picture on a rock you can take it home, and you can paint as many rocks as you want to.”

While some rocks are in plain sight, Pair said other rocks require some searching.

“You never know where you might find one,” Pair said. “I was driving around earlier today and saw one. There are some in plain view, and there are some on windowsills, or on a brick ledge, or really wherever a rock will fit.”

Pair said individuals do not have to know how to paint to participate.

“Anyone can have fun with it even if they don’t view themselves as a painter,” Pair said. “Kids loving painting something on a rock and then getting to see it appear on the Facebook page. In a world that is such a mess, it is sometimes nice to just have a break from it, and be able to have something to enjoy with others.” 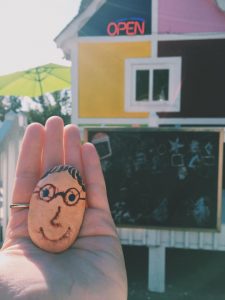 Anyone can participate in the project, which provides a way for people to spread good cheer to others.