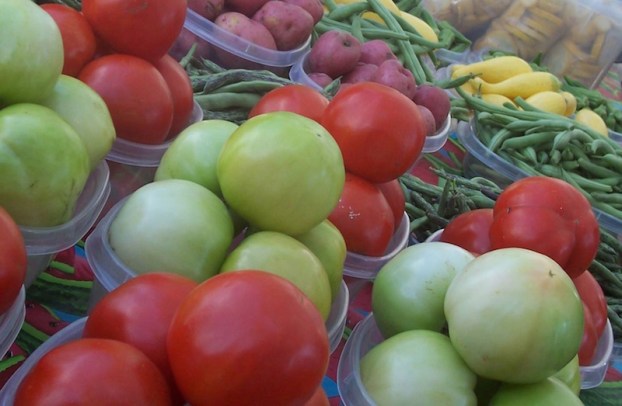 Even if you did your shopping under an umbrella at the opening day of the Montevallo Farmers’ Market last Monday, you had to appreciate the sunshine.

After all, the sunshine — and, of course, that ubiquitous rain — was responsible for the mouth-watering fare laid out fresh and plentiful for your shopping convenience. The rain may have somewhat reduced attendance, but it did not dull appreciation for this summer tradition.

The market, sponsored by the Montevallo Chamber of Commerce, operates every Monday through Aug. 21 from 3-6 p.m. in a lot at Island and Shelby streets.

Speaking of the Chamber, let’s raise an extra cheer for Steve Gilbert, the chamber’s executive director, who got soaked to the skin while doing his best to help keep the farmers dry.

Each time the downpour filled overhanging canopies above the vendors’ stalls, it was Gilbert and a broom raising the sagging centers of the canopies to allow the accumulated water to run off. Often, it seems, it ran off all over Gilbert.

Also, Gilbert was playing a dual role on June 5. He was on “work release” at the market between stints in the city’s “Jail and Bail” fundraising event on the front porch of Eclipse Coffee and Books.

Even those of us lucky enough to have our own gardens look forward to the farmers’ market each week. Sure, I have tomatoes, peppers and cucumbers in my own garden plot, but my produce production cannot match the expertise on display here.

Tina Grogan Smith ends her teacher’s aide school-year job just in time to load her truck for the market.

She got my eye opening day with a peculiar looking squash—long like zucchini but caution-light yellow. Smith explained that these were yellow zucchini. I had to have three of them—split, brushed with olive oil and garlic and grilled, they were fabulous. My spouse snapped up one of Smith’s loaves of banana bread. Next time, we plan to try her homemade corncob jelly.

The friendliness makes participation a joy for Smith. “My son graduated and went off to school, so I am not producing as much this year,” she said. “But the best part of it for me is the community togetherness.”

One of the secrets of selling a variety of produce, some of it a bit exotic, Smith said, is the buy-and-try method her son suggested: “I find at least one recipe for an unusual vegetable and give them out.”

And the offerings include more than fruits and veggies. Herbs, eggs, infused oils, baked goods, jellies, honey, jams and frios frozen treats are on sale.

By NANCY WILSTACH / Community Columnist So you’ve got a demanding professional career, an executive husband and two kids—and you... read more