The story of ‘Phoenix’ rising

“The Phoenix from mythology burns and reinvents,” Louie Smith said. “Phoenix is the title.”

Once Smith shared this epiphany in Lit Mag class, the concept of the magazine was cemented—and the real work of creating this venue for PHS artwork, photography, writing and design was underway. 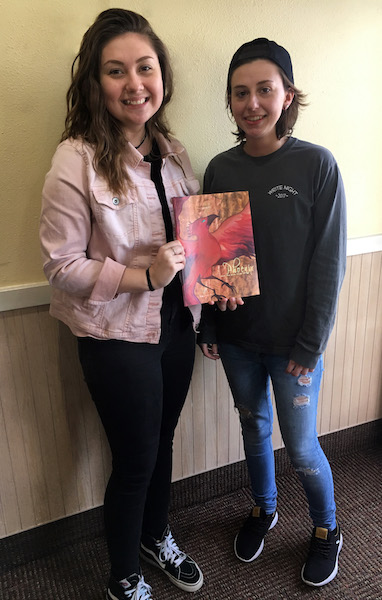 Recent PHS Graduate and Lit Mag Editor Kat Owens holds her senior Lit Mag. Accompanied by her older sister, Michael Owens, a PHS alum who also served on Lit Mag staff, these two young women have been a cornerstone of the Pelham High School Literary Magazine’s success as a venue for the arts and as an award-winning magazine. (Contributed)

“Holding it in my hands is so tactile. I love the weight of it. The printed cover color is so much richer,” said Design Editor Anna Carden.

These final reactions to this year’s PHS Literary Magazine, “Phoenix,” were better than initial reactions due to the accidental first printing of the proof copy that the students had worked diligently to correct.

“Lit Mags have arrived,” I sent out before opening the box. Editor-in-Chief Morgan Harris was with me for the unboxing.

“The cover color isn’t corrected,” Harris said immediately Flipping to the closing quote page she’d revamped and finding it unchanged she whispered, “They printed the proof.”

Communicating with our salesperson, she quickly discovered the error and promised to deliver the corrected magazine ASAP. The staffers were stunned that I wasn’t angry.

“I understand mistakes,” I said. “I make them myself.”

“We have proof that we make them,” Aguilar chimed in.

“Giving grace builds professional relationships,” I said. “This is what adults do. I have confidence in Walker 360 that they’ll make this right.”

Within twenty-four hours, we held the corrected copy in our hands.

“I love the tactile feeling of  the words raised off of the page,” several staffers noted.

“Look at what we made,” Copy Editor Erin Riley said as she carried the magazine to her mom.

Holding this work with its own imprinted shapes and colors is exhilarating. The fundraising required to produce a print magazine is intense. When it comes to preserving PHS artistry, the fundraising is worth the time and effort—and learning to forgive and move on—is priceless.