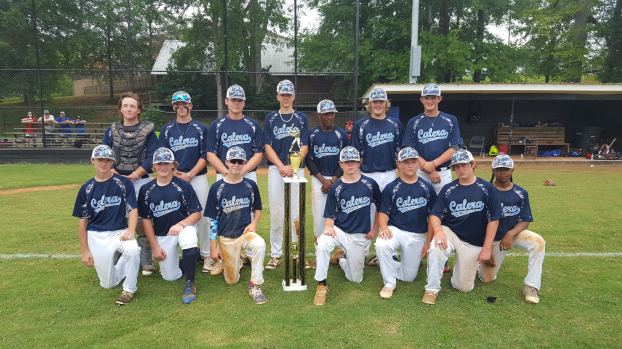 The Calera 15U baseball team poses with its championship trophy after winning the Playmaker World Series in Shelby County on July 18. (Contributed)

A Calera youth baseball team continues to impress after winning the 2017 15U Playmaker World Series, which adds to the storied trophy case of the young team.

The Eagles competed in the event from Jun 15-18, competing in pool play to determine seeding before eventually going undefeated in double elimination bracket play.

Scott Butterworth, who is the father of Jaxon Butterworth a player on the Calera high school team, has been coaching the team for the past five years and has loved being a part of all of the success.

“They just work extremely hard,” Butterworth said. “You try to give them a little direction, but the impressive part is it doesn’t take much before they are out there performing and working hard to be great.”

The tournament took place at several different locations in Shelby County including, Calera, Hoover, Montevallo, Oak Mountain, and Pelham; and it also featured several teams from the county including age divisions from 7U-16U.

They started Saturday’s double elimination portion of the tournament with another easy win over 31 North White, taking them down by a final of 9-0, paving their path to the semifinals. In the semifinals they picked up another shutout as they took down 31 North Red 10-0.

That last win put them into the championship game against 31 North Blue, who was coming out of the loser’s bracket and would have to have beaten the Eagles twice in a row. Calera’s team took no chances, posting their third shutout in a row in an 8-0 win.

“Our pitching is what we are built around and it was fantastic, but it also helped having a defense behind them that was able to make the plays anytime the ball was put in play,” Butterworth said of the three straight shutouts to end the tournament.

This Calera team has been dominating the last several years and took home the 2016 Alabama Dizzy Dean World Series championship a year ago. They’ve also picked up several more big tournaments throughout the last few years.

“It’s just so much fun to be around these kids because they get a lot of enjoyment out of playing and want each other to reach their max potential,” Butterworth said.

They will travel to Panama City, Florida, from July 24-29 to compete in another prestigious event, the Grand Slam World Series, as they look to continue impressing.

The Calera 15U team consists of five players from Calera, three from Columbiana and three from Montevallo.