Columbiana’s Liberty Day celebration is a tradition that dates back 31 years. What started as a way to celebrate the Statue of Liberty has become a much-anticipated event that attracts visitors from far and wide.

Each year a Grand Marshal is named, and for 2017 in the city of Columbiana that honor goes to Col. Erskine Ramsey Bentley II. 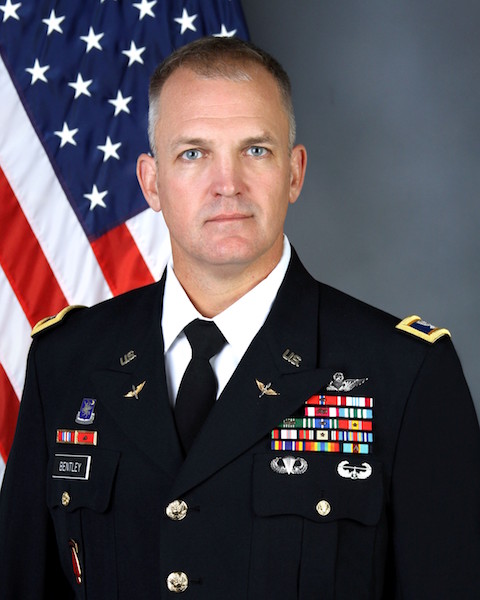 Col. Erskine Ramsey Bentley II will be Grand Marshal at Liberty Day in Columbiana on June 24. Bentley is a native of Columbiana and has a distinguished history of military service. (Contributed)

Bentley, a Columbiana native, is the son of council member Ouida Mayfield and the late Erskine Bentley.  He has a long-standing reputation for excellence in his military service.  In 1989 he was commissioned as a Distinguished Military Graduate of University of Alabama at Birmingham ROTC program. While attending the University of Alabama at Birmingham he received his Bachelor of Science in accounting.

The list of Bentley’s military achievements is a long one, and it is because of his service to this great country that Columbiana Mayor Stancil Handley feels that Bentley is the best choice for this year’s Grand Marshal.

“Liberty Day is a celebration of the liberties we enjoy in this country, and he [Bentley] has spent his adult life serving this country,” Handley said. “I think that makes him the perfect choice.”

Bentley is married to the former Staci Lee Corbin of Nashville and they have one son, Caleb.

This year’s parade line-up begins at 2 p.m., and the parade will begin at 3 p.m.

This year’s Liberty Day event will see several exciting new events including the Columbiana Heart Walk and a hot dog eating contest. The car, truck and motorcycle show will be back in town, plus tons of great vendors, food and music. Liberty Day takes place in historic downtown Columbiana. Admission is free.

For anyone interested in participating in any of the events, contact Elizabeth Smith, Marketing Director for the City of Columbiana, at (205) 669-5808 or esmith@cityofcolumbiana.com.

A complete list of events and times can be found on the City of Columbiana Facebook page.

By JENNIFER MAIER / Community Columnist Cyclists from all over the country will be rolling through Columbiana on June 8... read more