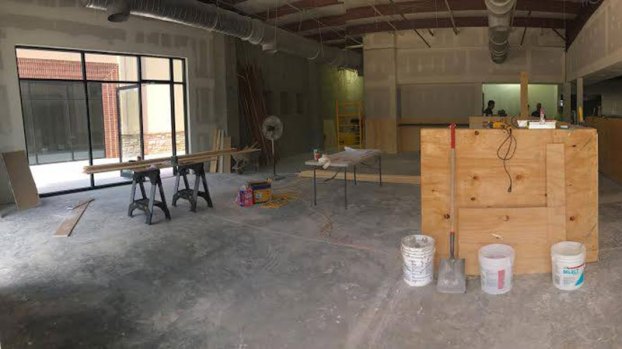 Crews recently began preparing Suite 200 of the Alabaster Landing shopping center off U.S. 31 to house a new Taziki’s Mediterranean Café. The restaurant is set to open in mid-July. (Contributed)

ALABASTER – Alabaster’s newest restaurant is set to open its doors in mid-July, and currently working to hire employees for the new location, the company announced on June 29.

Crews recently began working to prepare the building at 630 First St. N., Suite 200, to house Alabaster’s first Taziki’s Mediterranean Café. While the restaurant’s managers said Taziki’s will open in the Alabaster Landing development next to Shelby Baptist Medical Center in mid-July, they have not yet announced a specific opening date.

Once it opens, the Alabaster Taziki’s will be 3,030 square feet with a covered outdoor seating area, and will be the restaurant chain’s first to feature its new interior design.

“Alabaster is a beautiful community and we are thankful for the opportunity to open a new Taziki’s in this thriving city,” Taziki’s founder Keith Richards wrote in a statement. “Our Alabaster Taziki’s will include an all new interior design. We think Taziki’s patrons will love the restaurant’s crisp, modern and community focused approach to dining.”

To gear up for the grand opening, the company currently is hiring for multiple positions, including cashiers, cooks and shift leaders. Those interested in applying should send resumes to alabaster@tazikiscafe.com or visit tazikiscafe.com/careers.

Harbert Realty Services recently completed Phase I of the Alabaster Landing development, and Jimmy John’s and Pizza Hut opened in early November 2016. With the addition of Taziki’s, two spaces remain available for lease at the center, said Harbert Vice President of Retail Development James Proctor, who is the leasing agent for the property.

By GRAHAM BROOKS / Staff Writer HELENA–Parents and children filed into Helena City Hall on Wednesday, June 28, and were... read more