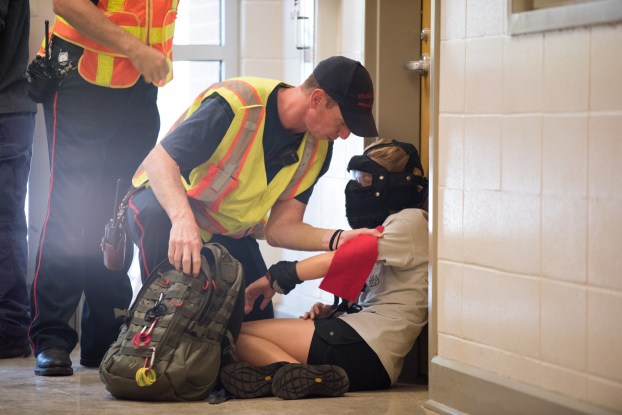 Though the two trainings do not overlap, Pelham Police Chief Larry Palmer said the fire and police departments are making conscious efforts to complete more training exercises together.

“You don’t want to be put to the test for the first time during a real-life event,” Palmer said. “We try to set it up to be as close to a real life situation as we can. We’re constantly training as a group and individually and every time we train we find areas that we can improve.”

During several different scenarios, police officers worked to identify, locate and stop the threat while fire department medics came in to treat injured victims. The exercises utilized volunteers and to act as injured victims.

Palmer said officers also spend time analyzing real-life events to come up with ways they could have approached the situation. Palmer said more time probably goes into planning rather than the actual execution of the plan.

“This is our first time doing a training of this type with the police department,” Fire Chief Tim Honeycutt said. “With us having access to this facility right now it’s a good time and a great place to train. We’re here to learn what we can do to support police efforts in the case of a large scale event.”

The training consisted of classroom instruction and practicing different scenarios. The instructors for the courses were people within the departments who specialize in certain areas.

Honeycutt said 10-15 first responders from each department participated in the exercises on each day to ensure that everyone received training.

“This is a very unique opportunity for out two departments to come together,” Honeycutt said. “The goal is to make the process better. Public safety as a whole is a gigantic team and we each carry out different aspects of it.”

Palmer said he’s received positive feedback from officers and the instructors about the training.

By BRIANA HARRIS / Staff Writer PELHAM – A Birmingham man is being held in the Shelby County Jail after the... read more