HOOVER – A 20-year-old Chelsea man was arrested for allegedly stealing a vehicle from a dealership service lane. 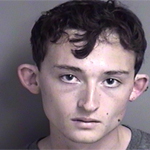 Ian Tyler Rettig has been charged with theft of property first degree and is in custody at the Jefferson County Jail, according to a release from the Hoover Police Department.

HPD officers responded to Mercedes-Benz of Birmingham at about 10:49 a.m. on Tuesday, June 27 on a report of a stolen vehicle.

Officers learned that the owner of the car brought it to the dealership for service and left it running in the service lane.

A white male was seen getting into the 2013 Mercedes C300 and driving away.

At 11:44 a.m., the Shelby County Sheriff’s Office located the suspect and vehicle in the 1700 Block of Signal Valley Trail in Chelsea.

Rettig was taken into custody and brought back to the Hoover City Jail, and later transferred.