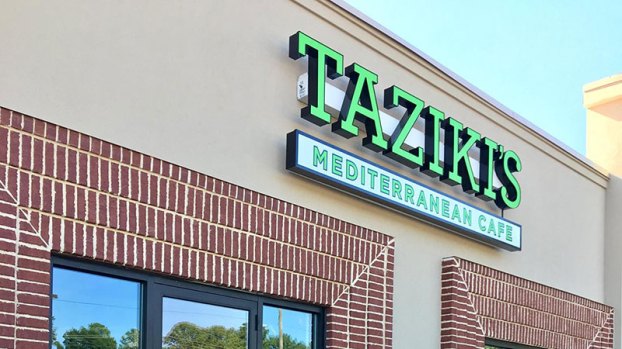 Alabaster’s Taziki’s Mediterranean Café will open its doors to the public following a July 18 ribbon-cutting ceremony at 10:30 a.m. (Contributed)

ALABASTER – The city’s newest restaurant will open its doors following a ribbon cutting ceremony on July 18, the restaurant’s owners announced on July 14.

Taziki’s Mediterranean Café will open to customers following a ribbon-cutting ceremony at 10:30 a.m. on Tuesday, July 18. The restaurant is located in the Alabaster Landing shopping center at 630 First St. N., Suite 200, next to Shelby Baptist Medical Center.

As part of the opening ceremonies, Taziki’s will be making a donation to Aaron’s Staff, which is an Alabaster-based nonprofit organization and respite care ministry for families of special-needs children.

Over the past few weeks, crews have been working to prepare the building to house the Mediterranean restaurant. Once it opens, the restaurant will be 3,030 square feet with a covered outdoor seating area, and will be the restaurant chain’s first to feature its new interior design.

“Alabaster is a beautiful community and we are thankful for the opportunity to open a new Taziki’s in this thriving city,” Taziki’s founder Keith Richards wrote in a statement. “Our Alabaster Taziki’s will include an all new interior design. We think Taziki’s patrons will love the restaurant’s crisp, modern and community focused approach to dining.”

Harbert Realty Services recently completed Phase I of the Alabaster Landing development, and Jimmy John’s and Pizza Hut opened in early November 2016. With the addition of Taziki’s, two spaces remain available for lease at the center, said Harbert Vice President of Retail Development James Proctor, who is the leasing agent for the property.

By ALEC ETHEREDGE | Sports Editor PELHAM – We are inching close to Aug. 24, which also means we are... read more