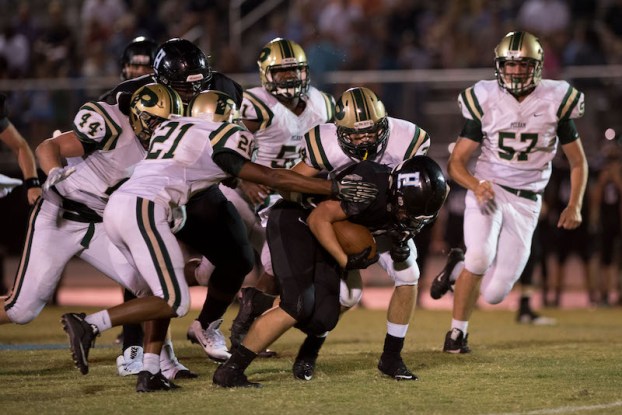 Pelham football will hold a youth football camp July 24-26 at the high school’s football stadium. The camp is free and open to all kids who have signed up for Pelham Youth Football for the 2017 season. (File)

PELHAM – We are inching close to Aug. 24, which also means we are nearing the beginning of the 2017 football season. It’s something that in this state is a long awaited affair each year as we go through the dry summer months with no sports to entertain us or depress us, depending on how you look at it.

The Pelham Panthers football program will be one of the first teams to kick off the new football year, which will be here in 42 days, as they are one of a few teams to start the season on Thursday, Aug. 24, with a home matchup against the Homewood Patriots.

While we and the players wait for that nearing date, Pelham is out in the heat of the summer preparing for the season with workouts and tough practices. They also plan to take the time to host a youth camp and make the kids feel the excitement they do as the team builds up momentum toward that first game.

The Pelham Youth Football Camp will take place July 24-26 at the high school’s football stadium, Ned Bearden Stadium. Each night of the camp, Monday-Wednesday, kids will learn from the Panthers’ coaching staff and players from 5:30-8.

Coaches will be covering basic offensive and defensive fundamentals throughout the camp. While Pelham’s last two seasons haven’t been the most successful on the field, they are building in the right direction as a program with 36 juniors now on the team.

All of that youth is in part due to the split of the school with the addition of Helena High School as many players decided to transfer to the new school, leaving the Panthers with a lot of youth.

What it does show, however, is the progress they are making molding young players into great ones before they leave the school. Something that should make parents and potential campers happy.

Head coach Tom Causey is great at recognizing players and helping teach them the right things to do. It’s not just on the field performance that Causey and his players can help teach, but the effort and leadership skills involved to be better when things aren’t always going the way you expect them too.

The camp will be free and open to all kids who have signed up for Pelham Youth Football for the 2017 season. It will give them a great opportunity to hone in on their skills and figure out what to work on as they embark on their own football journey this year.

FROM STAFF REPORTS MONTEVALLO – The transition from the Peach Belt Conference to the Gulf South Conference isn’t the only conference... read more