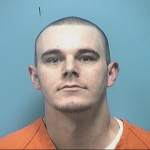 On July 10, Circuit Court Judge William Bostick set the trial for Helena resident Justin Taylor Ward for Monday, Sept. 11. Bostick ordered that the trial be set for Sept. 11, “and each day thereafter” until it is resolved.

Ward must also appear in court for a pretrial docket call on Monday, July 31, and for a plea date on Tuesday, Aug. 29.

“No continuances will be granted except for extreme circumstances,” read Bostick’s order. “Should this case not be resolved by the end of the Sept. 11, 2017, trial week, it shall be placed on a court’s trial docket of Monday, Oct. 16, 2017, and given a priority setting.”

Justin Taylor Ward, who was 26 years old at the time of the alleged incident, was arrested on April 28, 2015, and charged with capital murder and robbery of Gene Ward Jr.

Gene Ward’s body was discovered in his home in the 2500 block of Shelby County 93 in rural Shelby County near Helena on Monday, April 27, 2015 where he died from apparent gunshot wounds, according to police.

According to Ward’s indictment in early May 2015, “on or about” April 26, 2015, Ward allegedly “intentionally caused the death of Gene Ward Jr., by shooting him with a pistol, and the said Justin Ward caused said death during the time he was in the course of committing a theft of property, to-wit: One brown leather wallet with assorted contents and/or U.S. currency, one check and one 1994 Mercedes vehicle.”

Capital murder is a Class A felony, and if convicted, Ward could face up to life in prison.

Because a firearm or deadly weapon was used or attempted to be used in the commission of the felony, Ward now faces no less than 20 years in prison according to Alabama Code.