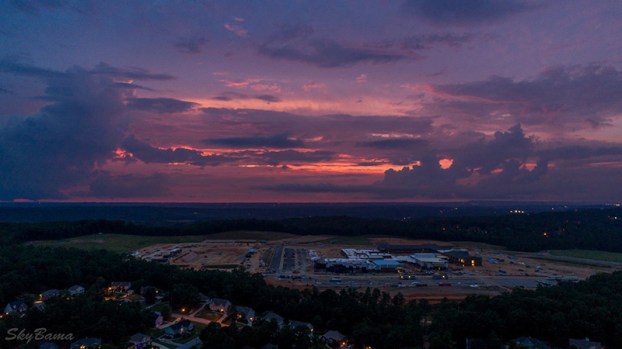 The Alabaster Board of Education voted to purchase new furniture and weight room equipment for the city’s new high school during an Oct. 12 meeting. The school is set to open to students in January. (Contributed/Kevin Henderson with Skybama.com)

ALABASTER – Contractors will hit a few major milestones in the construction of Alabaster’s new high school campus over the next few weeks, and are “100 percent committed” to have the project done in time to open for the second half of the 2017-2018 school year, the construction manager told the city’s Board of Education on July 19.

During the meeting, Volkert Vice President Leon Barkan gave School Board members an update on the construction project, and said the contractors are “making great progress.” Volkert is the construction management company for the new school project.

Barkan said he toured the campus and met with the contractors shortly before the meeting, and said the “site looks great.” He said the contractors are preparing to install the final portion of the rotunda in the main academic building in about two weeks, which is the last major bit of construction on the main building.

Crews also likely will finish installing walls and roofs on the auxiliary structures, such as the gyms and fine arts center, in the coming weeks, which will allow the contractors to build out the inside of the structures.

“The bottom line is we have 100 percent commitments from the contractors to be done in December,” Barkan said. “They are very committed to having it done by then.”

GSCCC ‘State of the Schools’ luncheon set for July 26

By GRAHAM BROOKS / Staff Writer PELHAM–Summer is slowly coming to a close and the Greater Shelby County Chamber of... read more