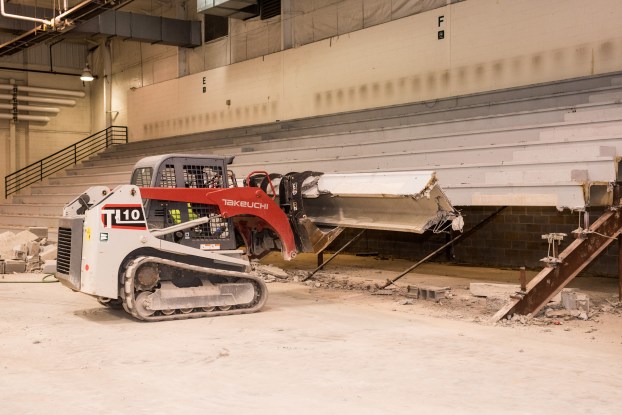 The renovation of the main ice arena at the Pelham Civic Complex and Ice Arena is underway in preparation for the start of the Birmingham Bulls’ season. (Reporter photo/Keith McCoy)

PELHAM – The renovation of the main ice rink at the Pelham Civic Complex and Ice Arena is underway in preparation for the start of the Birmingham Bulls’ first season in the city.

At a Pelham City Council meeting held at the Civic Complex on Monday, July 17, several resolutions relating to the renovation of the main ice arena were approved. The Council authorized the roughly $30,000 purchase of a 100kW generator and the $300,000 purchase of HVAC units and components to be installed at the complex.

The City Council also authorized Mayor Gary Waters to enter into an agreement with Taylor & Miree Construction, Inc. for the completion of renovation services at the Civic Complex.

Tate said the addition of the generator and the HVAC units were necessary to accommodate the additional number of people the ice arena will be able to seat once the renovation is complete.

Tate said the arena will go from being able to seat about 3,000 people to seating a maximum of about 6,000 depending on the type of event being held.

“This is going to be a great thing for Pelham and I’m excited for people to see it and get to use it,” Tate said. “It’s a multipurpose facility and we will have real seats, not bench seating.”

In June the City Council approved a roughly $1.8 million base contract price for the seating. More than 4,000 seats are included in the plans. The seats on the east and north sides of the main arena are being removed and replaced as a part of phase one of the PCC renovations. The seats on the west side will stay because of the structural benefits of leaving them there.

All of the new seats will be chair back seating, with some being standard seats and others padded seats. Tate said locker rooms, restrooms, access to upstairs, a VIP viewing area, a media viewing area and some additional concessions are also included in the renovation plans.

He added that Alabama and UAB hockey clubs will also benefit from the renovation since all of their home games are played at the arena.

PELHAM – A 12-inch broken water pipe caused a water outage in several neighborhoods throughout Pelham, according to the city.... read more