NORTH SHELBY – A navy lion head logo is now permanently affixed to midfield at Briarwood Christian School’s Lions Pride Stadium. The new artificial turf surface, which is scheduled for completion this week, includes gold soccer lines and navy end zones with the word Briarwood in the south end zone and Christian in the north.

Briarwood is the fourth school in Shelby County to turn their grass field into an artificial turf surface. Spain Park and Pelham first added turf in 2007, followed by Thompson in 2014.

The new surface is part of a $2 million capital campaign to upgrade athletics facilities at Briarwood’s South Campus. The process has lasted more than a year including the additions of drains to avoid water damage, the grading of the playing surface and the resurfacing of the Lions’ eight-lane competitive track during the winter. Athletic Director Jay Matthews says the track and football field surfaces combine for roughly $1 million of the total cost. EnviroTurf, a company based in Mississippi, rolled out the first strips of turf during the last week of June and the install is scheduled to be complete this week.

“We had a great grass field. Our people have done a wonderful job over the years with keeping us with a beautiful field, but with the traffic we put on the field during the course of a football season, in particular, and now lacrosse and soccer, we felt like economically it would make sense,” Yancey said. 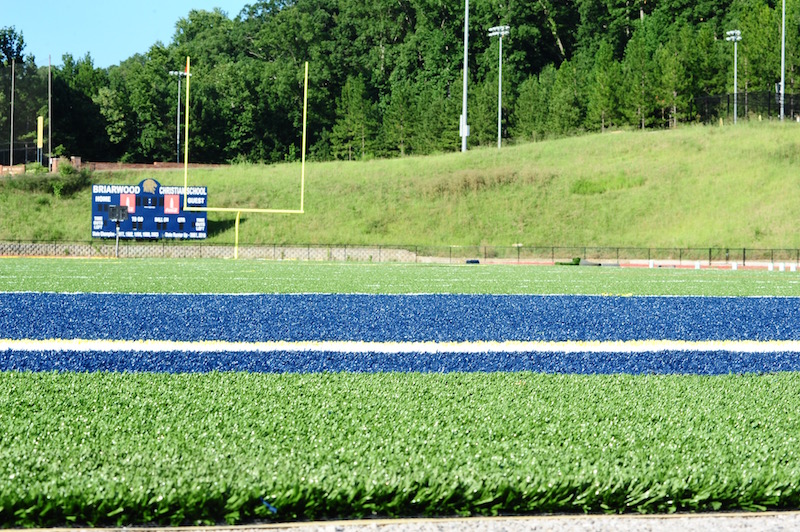 The Cahaba Valley Lions Youth Football and Briarwood Christian School football programs combine for up to nine games per week with two games played on Mondays, four on Tuesdays and two on Thursdays preceding each week’s varsity game on Friday nights.

“If you have a rainy night scheduled on a Tuesday night, do you tell those kids you can’t play because we’re saving it for Friday night? That’s a decision that sometimes we’ve had to make, and I don’t like doing that. With an artificial turf field, now we’ll schedule games and the more we play on it the better. Rain or weather won’t make us postpone or cancel games. That’s what we’re trying to avoid,” Yancey said.

The field will be in high use this fall with 21 home football games currently scheduled for grades seven and up – not including youth football, lacrosse or practice time. An example of the field’s use can been seen in the first week of the season.

The freshman football team is scheduled to be the first game on the new surface when it hosts Mountain Brook on Tuesday, Aug. 29 at 5:30 p.m. The BCS Lions will open the 2017 varsity regular season at home against Chelsea on Friday, Sept. 1 at 7 p.m. The freshmen, seventh grade, eighth grade and junior varsity teams will also host Chelsea the following week.

“We’ll get so much use out of it that it will be financially a good deal within a short period of time,” Yancey said.

The field will be publically dedicated in a ceremony on Aug. 11 at 6 p.m. as part of a community gathering event to highlight all of its sports teams and updates to all facilities.

“We’re hoping on August 11 to be able to show case the best our athletic facilities have ever been in,” Matthews said. “The whole thing has been really interesting to watch. Our donors and the people who put the time and effort in to planning has been a joy to watch.”