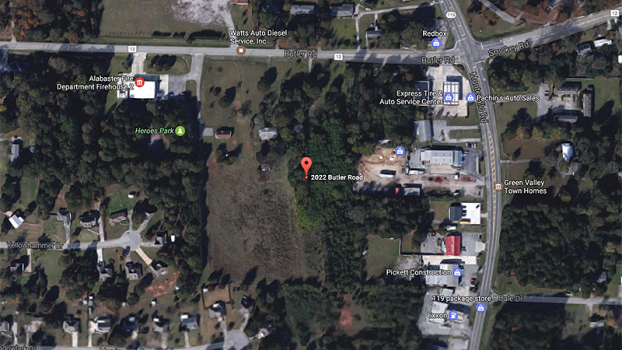 ALABASTER – The city of Alabaster may attach liens against a pair of recently cleared properties off Butler Road, and will hold public hearings on the matter during a late August meeting.

At the public hearings, residents will be able to speak for or against the proposed liens before council members vote on the matter the same night.

During a mid-March meeting, the Alabaster City Council voted unanimously to accept recommendations from the city’s Housing Abatement Board to demolish the long-vacant homes at 2022 Butler Road and 2040 Butler Road.

During a Jan. 19 work session, Alabaster Fire Department Planning and Safety Division Lt. Rick Benson said the pair of homes had been empty for a significant amount of time, and said they presented safety hazards for those who live near them.

Benson said the properties were so overgrown many passersby don’t know they contain homes, and said the lots posed a hazard to children and others who trespass there.

Because the city paid to have the properties cleared, it is considering the liens to recoup its costs. If the liens are approved in late August, they would have to be repaid to the city if the properties are sold in the future.

Benson previously said the two properties are owned by the same people, who were in favor of the city tearing them down.

By NEAL WAGNER / Managing Editor ALABASTER – City of Alabaster employees will have a new pay scale for the upcoming fiscal... read more