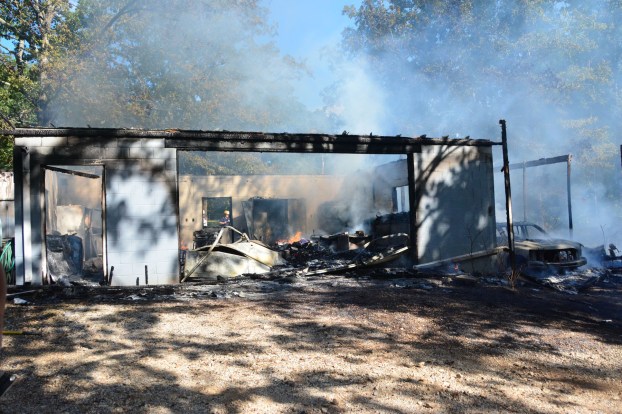 Firefighters work to put out the remaining flames after arriving on the scene of a structure fire at a residence off Shelby County 47. (Reporter photo/Amalia Kortright)

COLUMBIANA – First responders from the Columbiana Fire Department, Southeast Shelby Rescue and the Shelby County Sheriff’s Office responded to a structure fire on a residence off Shelby County 47 outside of Columbiana city limits on the afternoon of Monday, July 31.

Owner Milton R. Stanley said he was inside his house when he was notified by two passersby that the garage on his property was on fire. While he and his wife were never in immediate danger, Stanley said he lost a new pick-up truck and a fishing boat.

Columbiana Fire Department Fire Chief Johnny Howard said they received the call shortly before 3 p.m. and arrived on the scene about 10 minutes afterward. Howard said the fire damaged a 30-by-25-foot area of property, and no deaths or injuries were reported.

The CFD will be investigating the cause of the fire. Howard said he believes the fire was an accident and no arson is suspected.

“It’s just one of those misfortunes,” Howard said.

Stanley thanked the firefighters who came to put the fire out.

“I appreciate all of the help from the fire department,” Stanley said.